Still from Little David (1999), Chloe Pienne. Courtesy of the artist

Someone Else features eight international and New Zealand artists with six videos contributed by the international contingent, and three two-dimensional pieces - two photographs and a vinyl on vinyl work - from New Zealanders Edith Amituanai, Ronnie van Hout, and Sharon Margaret Russell. One of Amituanai's trademark photographs and one of van Hout's text works which reads ‘BE SOMEONE ELSE’ are hung at the opening of the exhibition next to the introductory wall text. The exchange between these two works establishes a loose thematic framework for the exhibition. Amituanai's young female subject is caught in a situation where her identity is paradoxically fixed, as an adolescent within a strict family structure, and fluid, as an immigrant living in a new city. Van Hout's vinyl text work taps into the trope of freedom of identity, an American dream, be-who-you-want-to-be ethos complete in the most plastic of materials. The two static works soon fade into the background once inside the darkened spaces that house the grander, altogether more engrossing video works.

Two short single-channel Chloe Piene videos occupy the first room: Little David (1999) at one end and Blackmouth (2004) at the other. Walking into the room places the viewer in the crossfire of the two. Both videos take children as their sole subjects and both are comprised of clips of fleeting though intense action. In Little David a boy in white underpants stomps around a backyard at night, punching and kicking the air while uttering phrases such as ‘I’ll squish ‘em good!’ and ‘I’m a barbarian!’. The words come from Piene’s letters to a prison inmate. The contested idea that language can be used as a hallmark of identity runs through the exhibition. Both Gillian Wearing’s 10-16 (1997) and Anri Sala’s Intervista (1999) problematise the reductionist view that language is a static indicator of self. 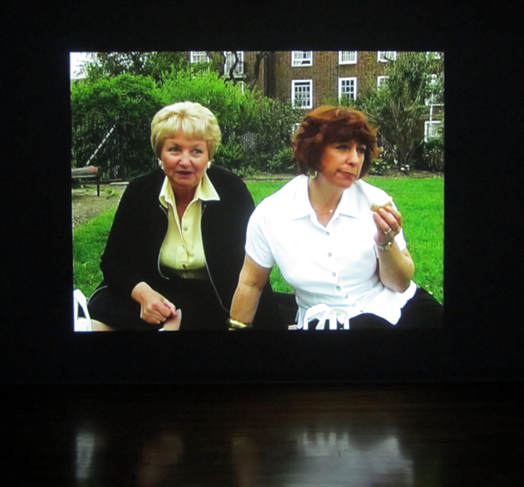 For 10-16 Wearing gathered written expressions from children aged between 10 and 16 detailing their hopes, dreams, and innermost feelings and had them perfectly lip-synched by adults. Beginning with the youngest and running through to the oldest, each adult speaks directly to the camera - confession style - affecting gestures and ticks appropriate to the read texts. Not only is there an obvious disconnect between body and voice / language, the progression from youngest to oldest does not represent a linear development in emotional or cognitive maturity. As a 12 year old delivers a monologue on the ethics of abortions and a 15 year old discusses the joy of riding buses in language befitting a six or seven year old, age becomes a rather arbitrary standard of judgement. The work is touching and funny, yet in the context of Someone Else, where the complexities of identity are consistently foregrounded, it feels as if it the same thing being said in a slightly different manner.

Anri Sala’s Intervista explores language and identity in the particularly fraught context of communist / post-communist Albania. This politically and socially trying transition is played out in the relationship between Anri and his mother - an ex-Marxist / Leninist Youth Group leader - after he discovers soundless footage of his mother giving an interview after a communist conference. The glitchy and inconsistent cinematography in Intervista reflects the charged communist history of Albania, where communication between individuals was regulated by a set of informal Orwellian rules and limitations. When Anri’s mother’s words are finally revealed to her it is the syntax of her language, not the content, she cannot fathom when she says ‘Those are not my words’. As is established later in the piece, she still partly believes in the principles of the communist cause. What Intervista does more successfully than the other works in the exhibition is transcend an abstract personal level. In one respect it is about the relationship between Anri and his mother, but more than this, it captures wider, more transcendental concerns, about how a society can dictate freedoms of expression and tangibly influence familial relationships. 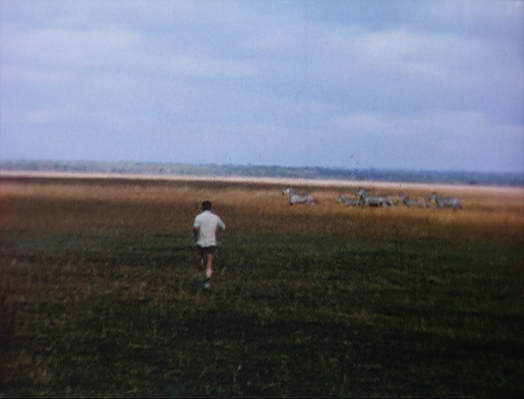 Still from Someone hears a shot (2008), Eric Levine. Courtesy of the artist

Interrogating similar parental relations is Erik Levine's Someone hears a shot (2008), which plays on a small screen in a booth-like room. The installation works to the video's strengths, privileging a home-movie / living room aesthetic, as the piece cuts smoothly between footage taken by Levine’s father on an African safari in the 1970s and flickering stills taken from television news coverage of his father’s subsequent shooting in suburban California. The mediation of the murder through the news media plays in contrast to the unmediated personal footage of the visceral hunting on safari so that Levine’s father’s death is reduced to yet another unsolved murder as seen on TV. Levine effectively manipulates our empathic responses and most would agree that this emotional distancing indicates a somewhat ‘unusual’ relationship between father and son.

Conversely, the absence or neglect of authority is celebrated in Ben Rivers’ black and white Ah, Liberty! (2008). With little narrative structure and a camera that seems to float from scene to scene, it’s a pseudo-ethnographic study of the lives of a group of children living, we are told by the wall text, on a farm in the Scottish highlands. It is Lord of the Flies ‘lite’ as we see the children playing in a junk heap, chasing animals, and driving a beat-up car through a river on the property. It’s all standard fare for anyone familiar with rural life, whether in Scotland or New Zealand. There are, however, more unsettling elements - the recurrence of falling ashes foreshadows the final shot of the farmstead going up in wild flames with no explanation or follow-up. Presented in wide screen and shot in 16mm the projection contains the grainy and enigmatic traces of its materiality. The meandering cinematic pace of Ah, Liberty! provides a moment of pause from the emotional intensity of the rest of Someone Else. That said, the tempo of the exhibition never really gains full momentum, it seems to stutter from one conceptually similar work to the next with little variation in the processes and methods behind the videos. Each piece has been made - and presented - with relatively simple techniques, which is not a purely negative comment. Certainly, Sala’s work, while appearing straightforward, belies a wonderful complexity, as do the videos of Wearing and Rivers to a lesser extent. In this respect the exhibition reflects the common misrepresentation of young people as innocent, passive actors by their older peers. By interrogating the developing identities of children Someone Else establishes that in this process there is a great deal of flux, and that there is always potential to pursue an alternative route, and in doing so become someone else.