The Hive Hums With Many Minds An exhibition in two parts, the first iteration of The Hive Hums With Many Minds brings together the work of five artists and is installed throughout the main galleries at Te Tuhi, in addition to the outdoor courtyard that has been refurbished by Charlotte Drayton as one of three large commissions for the show. A selection of artist material, interviews, and related reading material is also included, displayed on a low table in the central corridor between spaces.

Alex Monteith’s five monitor video work Rena Shipping Container Disaster 2011- is arresting in its content and placement as you enter the exhibition. In multiple long-takes that screen simultaneously, the video documents the dedicated clean up at Waihi Beach and Papamoa a year after the initial disaster struck off the coast at Tauranga in October, 2011. The footage conveys a crowded setting: volunteer groups (in rather ominous white work gear), large beige army vehicles and personnel, and the intense activity of diggers and machinery to shift large containers that had washed ashore all occupy the frame. Barring the locals who stroll in and out of view, keen to take in some of the action (appearing oddly passive, but typically ‘kiwi’ by contrast)—the total scene conveys the same sense of urgency and human-effort of the initial disaster. Heavy-vehicle tracks captured in several of the images of soiled East Coast sand are a reminder of the vast quantities of oil that continued to wash up on the foreshore 12 months on. As the first piece you encounter in the show, Rena Shipping Container Disaster is strategically placed as an important recent document of a modern ecological disaster that is a direct consequence of globalisation and the world’s reliance on fossil fuel—a reality ‘brought home’ to our small nation in the South Pacific. And as inheritors of indigenous and non-indigenous contested relationships to the land––and a clean, green national image––how we deal with a violent threat to the landscape such as the Rena, carries huge symbolic weight. In that regard, it’s interesting how Rena Shipping Container Disaster allows for a particular tension: simultaneously presenting an image of disaster which seems as if it has happened in a global ‘elsewhere’ of the 24hr news cycle, and an ‘on the ground’ perspective of community and civilian response to—as the artist describes it—“…a space that had to be interpreted by hand” (Radio NZ interview, 25 June). Industry’s impact on the environment is a theme in Caroline McQuarrie’s digital photographs of entrances to abandoned goldmine shafts on the West Coast of the South Island. Filling the gallery nearest to Rena Shipping Container Disaster, seven adits (horizontal entryways to underground mines) are documented as dark openings in the lush surrounds of native bush. In several images, the adits could be mistaken for cave entrances, with contours that appear naturally formed, and there is an impression that the photographer intends the subject matter to feel romantic—perhaps a reference to colonial (and colonising) practices of early photography in the 1800s in New Zealand. Indeed, the blackened voids that withdraw from the viewer are foreboding, impenetrable—as if to suggest we might read them as ruins, fragments of “loss” which evoke a distant and monumentalised past. However, such readings are at odds with the repetition with which the photographs are composed and how many there are. The name of this series, Homewardbounder—a clever title meaning to strike gold, enough to send a miner home—may imply that the images are concerned with evoking the intrepid feelings and fear of the unknown of European miners in their early attempts to make an income from imported dreams, and faced a harsh wilderness they knew nothing about. Definitely with their distinct feeling of nostalgia, it is unclear whether the photographs can be read within the exhibition framing which asks us to view them as critique, indexing a different kind of loss, one which sees these shadowy entrances as the solemn beginnings of environmental decline and industrial acceleration brought about colonisation.

Outside, in a refreshing shift in register—a crushed shell floor; trellis; and a pre-grown hedge with its own irrigation system form the components of Charlotte Drayton’s suburban intervention in Te Tuhi’s central courtyard. It must be nice to work outside on a day like today redecorates the former grey-tiled sculpture court with a real estate-feel Spanish patio. Drayton has introduced several sculptural planes and arranged them awkwardly, using materials slightly too domestic to match the feel of the flax, shrub and tile used around the institution’s existing exterior. Approaching from the gallery side, the view is partially screened off by a wall of white trellis which offers entry through a curved archway cut into the wooden screen. The function of a second entranceway is moot as the trellis finishes further along, and instead subtly primes the viewer that the courtyard has been formally tampered with. Ostensibly the main feature of the space, a hedge grown to head height cuts a diagonal across the middle of the courtyard where it briefly turns a corner. Once inside the ‘private’ area behind the hedge, one becomes privy only to the sounds of crushed shell underfoot (which have a kind of leisurely, non-serious crunch) and it’s easy to imagine that in the middle of the day, the decorative ground cover would reflect the sun to make the space uncomfortably bright. By shifting this kind of decision making into the context of the gallery (while making this shift appear slight) the suburban make-over makes for a different kind of reception as an artwork, and as such, comments on the way such everyday practices aim for normality but never really go anywhere. 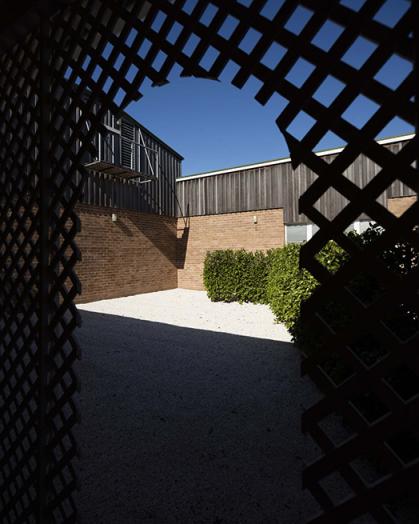 At the rear of the gallery Monique Jansen’s large, monochrome drawing A length without breadth is at risk of going unnoticed, as it competes with the pulsating sounds of the projection space next door. In this work, thousands of delicately drawn pencil marks ‘hold’ together in two vertical sheets that create a honey comb lattice when layered on top of one another, the simulation of crumpled folds at the base of the drawing create a moiré effect. The drawing is a surface of shimmering regularity, a map or terrain of interlocking fibres; non-singular, non-hierarchical, except when two or more layers intersect. The work is informational in structure and tone—strongly reminiscent of textile design, or more broadly, data mapping and visualisation. Though technically accomplished, A length without breadth appears process-driven in a way that might satisfy the maker but not the viewer. The work calls for a contemplation of surface (which is also its structure and its form) but this is compromised by the fact that the drawing uses several widths of paper to achieve its size. One might ask, why not work directly onto the wall? Interestingly, a group of working drawings hung on the opposite wall experiment with the same form, yet read differently at their humble scale. Each depicting a single folded sheet—like a piece of kitchen cloth—the subject matter of these colour inkjet prints is throwaway yet the understated abstraction of their depiction alters the quality of attention they ask for. The tension between the kind of meditation brought by pushing qualities of the mundane towards abstraction, and their immediate legibility as signifiers of a kind of unit of waste that our capitalist systems of production and consumption feed on, is a reading which, when considered in relation to the drawing opposite, begins a potentially more fertile conversation about abstraction and creation than A length without breadth achieves in isolation.

With a soundtrack whose audible ‘hum’ can be heard throughout the show, Rangituhia Hollis’s Oho Ake (meaning both ‘wake up’ and ‘rise up’) is central to the contents of this exhibition. An impressive video work, it is both absorbing and compelling; its three-channel 3D animation filling an entire wall of the long projection space throbbing with artificial colour and light. It is also the outcome of a large commission involving many collaborators— from animation students at Manurewa High School to sound artist Daniel Campbell-McDonald and music teacher Shannon Coulomb who both worked on the soundtrack. With noir-inflected, comic book style composition and storytelling, Oho Ake is a five-part fiction that uses autobiography and sci-fi to communicate themes of urban and technological alienation in a dystopic dream-sequence set in suburban New Zealand. In a particularly mesmerising scene, the aerial on a weatherboard house (a 3D model of the artist’s childhood home in Waipiro Bay) is modified into a complex and beautiful tekoteko whose parts slowly revolve wielding weaponry and baskets of Maori and Pacific origin. In another scene, a city high-rise is climbed by an insectile creature (which the artist says was inspired by his “frustration” with the anti-social architectures of central Auckland where he lived as a student) and the urban landscape is conveyed as blank, impenetrable; an authoritarian superstructure. Though some the voice-over narration is muffled, the overall message of the work communicates clearly. Oho Ake tells the story of a individual’s sense of spirituality and identity being replaced by a palpable sense of psychological unease, in an anonymising, gentrifying, globalising landscape. This is punctured with notions of adaptability and resilience in terms of a culture’s ability to combat the ongoing negative effects of colonisation.

The tense and driving soundtrack of Oho Ake also helps to initiate conversations between works (the audio comfortably leaks over Rena Shipping Container Disaster, at the start of the exhibition)—pieces that, in their separate spaces and with similarly distinct contents, tend towards wanting to be read on their own terms, rather in dialogue; as the exhibition framing of a centralised network or a ‘hive that hums’ suggests.