There is Time for Waking Slowly - Kim Pieters’ The Golden Fields If you could plan it, you’d wake up to a film like this. Though you wouldn’t actually wake up at all; you’d stay for a long time in the yellow saturated half-light of an evening which sends the sun slanting across fields so flat that they weigh the sky down. Half awake, the horizon tilts, just marginally, but with a finality like it’s the planet that’s tilted rather than the camera. There’s a sound like the sound of an organ, if you were inside of that organ, or inside the ear of someone who was inside that organ, or inside the sound of that organ waking up. You’d wake for 55 minutes, and then it would be dark, the film would end and waking would be over.

Watching Kim Pieters’ films induces a kind of synaesthesia―the difficulty in describing them with the precision they deserve stems from the fact that everything in them is first like something else, then itself. You find yourself talking about the film as if it were a painting, but a painting with movement, and a movement with sound, and a sound which is gold; you find yourself using increasingly abstract images to refer to what is quite a simple film, or is at least not complicated in any conventional sense. The term ‘audiovisual’ is useful here; the state of equilibrium which Pieters’ films occupy―not privileging what is seen over what is heard, or vice versa―makes them distinct. Watching them alters the way you navigate the field of a moving image, and makes you consider what it means to observe a sound.

It makes sense that thinking about Pieters’ video works would involve an engagement with painting―she is after all best known as an abstract painter (Pieters also makes drawings and photographs, and experimental music). In her paintings the surface is all, a field of mostly muted colour in which small fissures, abrasions and areas of darker pigment appear like bruises, or stains, or occasionally, like pressed plants in an album. That field may be canvas or paper; often it is plaster board, physically pocked-marked or blemished.

While the paintings are entirely abstract, they also suggest a relationship with the world outside of themselves, and to the inevitably dislocated relationship between image and text. Often this external reference is alluded to in the title. One such title that stays with me from her exhibition at Art Space last year (well, I had to look it up, but I remembered the crows and the castle): The sky above the castle is white, Chinese. Three crows slip down the cedar (from Miyazawa) (2010). Words matter, and are material too; so often they are inadequate. It is perhaps this fraught sense of ‘more to say’ that keeps the eye roving over the surface of these abstract painted works. We are continually made aware that the surface is a field, a kind of skin which is only just holding together.

The Golden Fields is a different kind of painting, and embodies a seamlessness or sheer surface unlike that of the paintings proper. This is of course amplified by the screen on which it is shown, where two-dimensionality is a given. But the work is also painterly in the composition of the image field, which at all times fills the frame very consciously, so that the film could be halted at any point and would make an impeccably balanced single frame, a distillation of the extended piece. Often the image is striped, gridded, a pattern more than it is a picture. In this grid the verticals are just identifiable as gold trees, and ploughed furrows comb the flat land. There is a consistent tension between the reading of what is seen on the screen as an identifiable landscape (it is the Canterbury plains, but you’d have to have been before there to know it; sometimes there are glimpses which are reminiscent of the suppressed gold of a Woollaston painting) and as an abstract image in which the markers are purely formal.

Sustained for almost an hour, the image changes slowly, but it does change, moving across a spectrum from full gold to darkness. It becomes apparent that the evening is lengthening, but this realisation comes slowly too; it’s as if the camera aspires to maintain step with the glowing, departing light, so that it will perhaps never actually get dark. While no single static frame could be said to contain narrative, a number of things happen as the time changes. A jet flies over leaving a streak of trail, you pass a water tank, maybe a shed, a fence line, maybe an irrigation system, you start to feel very lonely, you pass houses in which the lowering sun is reflected in the gold windows, a white barn and black macrocarpas, there are road signs, occasionally lines and power poles, the fields ultimately become a road with trees. It gets dark and the painting has moved. You haven’t fully realised because it’s as if you have moved with it. 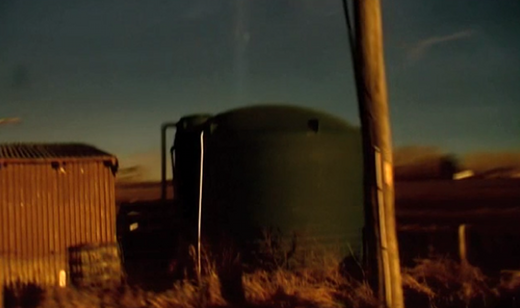 The movement in the work is inseparable from the sound, which is produced by UK-based drone musician Peter Wright. The Golden Fields is more than half music. There’s no ‘soundtrack’ here, rather it’s right at the centre of the piece, and it seems as if this is the motor for the movement of the camera, a single take which tracks along a uniform horizon. The first time you watch this film it seems as if the sound will drown you with its constancy; after several times through you notice how it rises and reverberates and falls, changes markedly but with an inevitability that is deeply reassuring. There will be no sudden movements here, everything is stripped back to its minimal form and the sound will see the light out.

8 minutes in things go quiet, before a bell-like sound heralds in the next phase in the music. At 28 minutes, it’s silent again, and it’s just the sound of the vehicle carrying the camera that you are left with, a sub-text of sound, which you know is still there when the music picks up again, towards a climax at about 36 minutes in. At some point you stop separating the sound and the movement and the image at all. The gold verticals are the strings of a harp; the volume of the sound relates to the weight of the furrowed earth which holds down the base of the image; the movement is pulling the darkness along with it like an ending deferred, so that there is time for waking slowly, so that there is time for everything.