Bullet Time is, on the first glance, an exhibition about technology and time, about the camera’s ability reveal what is invisible in the blur of the world flashing past us: the feet of a galloping horse, the speeding bullet and the things it impacts. Eadweard Muybridge, who first showed us those horse’s feet in 1878, is here on the walls along with Harold Edgerton, he of the bullets. They act as ancestors and presiding spirits of a sort, originators of motion studies, of the freezing of time. They studied motion, but—for all that Muybridge also experimented with crude animations, and for all that his sequences look something like film strips—what they produced were images, remarkable for their stillness. Muybridge in particular took images of moments of time out of their temporal sequence and distributed them spatially, one next to the other.

We can argue that video art does something similar, insofar as its own origin myth involves the migration of the moving image out of the cinema and into the gallery. It is not just that cinematic narrative was pulled apart and made over into multiple channels, also distributed spatially. It is that we come to moving images in the gallery first, not with the benefit of cinematic narrative, of montage and action, tension and resolution, but rather via a somewhat indeterminate encounter, half-way through the running. We come to video art in the gallery first, that is, as image, as something without introduction, something that exists simply within its frame and without back story. We come to it much as we come to a painting or photograph hanging next to it on the wall—even though it may in itself incorporate motion. Sometimes we might sit long enough to be drawn into the work’s longer development, sometimes not—but video art’s moving images are, like the frozen bullets and horses, torn from any longer flow that gives them meaning outside themselves. I don’t mean to force any strong comparison between video art and the still photos of Muybridge and Edgerton. However, an exhibition of video art that orbits around motion studies can be seen productively through this dialectic of image and action, of pictures torn out of the contexts of movement or narrative, with ‘moving image’ itself now a somewhat slippery category in between the frozen still and the extended sequence—an image that refuses narrative, but nonetheless contains movement. To think this way is to see Bullet Time as an exhibition not just about technology and time, but about frames and images and how they move and what action they might be part of.

Steve Carr’s Dead Time (2012) is a moving image reprise of Edgerton’s famous Bullet through Apple (1964) in seven channels, each of which showing an apple shot through in slow motion, timed so that a single bullet appears to travel through all seven. For most of the work’s duration, however, the moving images do not move—they are apprehended as pictures, as hanging fruit referencing, as we are told, still lifes by Juan Sánchez Cotán. Moving image repeating still life? Although the image works as still, it also reincorporates something of a ‘cinematic’ tension within it, since we know (or guess, having already seen the Edgerton photos) what is going to happen, and wait for it. When it comes, the bullet passes smoothly from one screen to the next, and the apples explode, their fragments rotating out. Even now that something is finally happening, there is an aestheticising quality to the movement, a removal from ordinary time, that allows us to retain a contemplative view of the action as image.

All of these concerns—undetectable motion, aestheticised movement, ‘cinematic’ tension—are present throughout Carr’s work. Screen Shots (2011) is all slow motion movement, a nine channel installation showing balloons, filled with paint, repeatedly popped. Indeed there is much that is painterly here—in the colours especially, of the balloons and of the paint they contain—but its effect is more importantly sculptural, working with the shifting surface of the liquid as it hollows and extends into the surrounding space. Transpiration (2014) on the other hand, which shows, sped up, the absorption of dye into carnations, seems to be completely still. If there is no cinematic explosion in Transpiration to keep us watching, there is nonetheless the minimal narrative of the flowers’ imperceptible colour change that we are encouraged to catch by extended viewing. Watermelon (2015) represents the other extreme: no expensive camera tricks here, just a watermelon being slowly squeezed by the addition of rubber bands, one after the other, which finally cause it to burst. Aestheticising effects, the image nature of the work, are downplayed, in favour of the most crass, Hollywood-style tension—‘how will it end?’—complete with explosion. 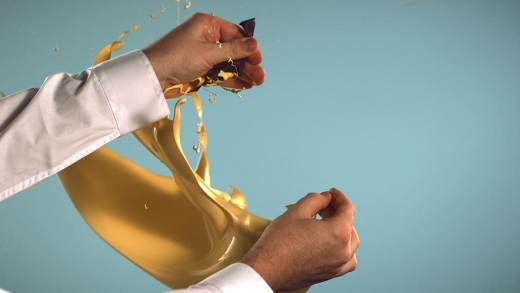 Daniel Crooks, like Muybridge, works with slices of time, but Crooks’s slices are pixel-thin, horizontal or vertical fragments that he then redistributes over the space-time of the moving image work itself. Crooks achieves a number of remarkable effects by this, effects that have something in common with the old innovations made by impressionism or cubism, showing us multiple perspectives and warped views. Static No. 19 (Shibuya Rorschach) (2012) shows a Tokyo street, in a view that tumbles to either side of a narrowing window in infinitesimal slivers, stopped and stretched out. Stationary shapes are pulled into horizontal stripes, moving pedestrians deposited as distorted, static versions of themselves against this background. This transformation can be read in two ways: it creates a sci-fi alternate universe and, more interestingly I think, an alternate picture frame, an experiment with figure and ground, a spreading and laying down of colour and shape from its source in the recorded image. It rehearses and refreshes all of the flattening, the dialectic of figuration and abstraction, so familiar to us from painting. In this context, I was unmoved by the sham mysticism offered by the wise tramp in the centre of the frame, and by the atmospherics of the soundtrack, both of which pull the work back in the direction of special effects and other worlds.

Crooks offers up variations on this kind of digital effect: the widening gap in Static No. 11 (Man Running) (2008), across which thin static vertical strips are pulled so that the movement of the runner is made over into a moving sheet of visual information, stationary within itself. Again I can’t help seeing this as most interestingly a pictorial project, rather than a matter of some ‘abyss’ opening up beneath the running man. The case is strongest when it comes to Imaginary Object #3 (2007), a single horizontal slice of a rotating object distributed upward over the frame. The original object is unrecognisable, but the result is sculptural and aesthetic through and through. And as with Carr’s work, there is an opposite outlier, something with more thoroughly cinematic in its imagery: Labyrinths (2014), features the repetition or cloning of a hooded figure, walking a tortuous path through a parking building.

For all that they offer up two versions of the cinematic, then—rising action and explosive resolution for Carr; sci-fi atmospherics for Crooks—there is in each a tension between art and cinema, pulling now towards a contemplative view of the image, and now towards the hint at narratives and representations that pull us out of the gallery, to other, more theatrical spaces.

Pressing the Bruise: a review of Human Hand by Fiona Amundse...