Christopher Ulutupu’s Lelia (2018) is the final part of his film work The Romantic Picturesque: The Postcard Trilogy, a trilogy comprised of Into the arms of my coloniser (2016), Do you still need me? (2017) and Lelia (2018). This past November, as part of an exhibition presented by the Physics Room and SCAPE Public Art in Ōtautahi Christchurch, the whole trilogy has been exhibited together for the first time, as a single-channel, one hour and one minute long cycle.

At the Physics Room in their new gallery space on Worcester Boulevard, The Romantic Picturesque is projected onto a wall behind a hanging black curtain. This fairly new space, being smaller than their former space in the old High Street post office on Tuam Street, provides Ulutupu’s film with a sense of focus and intimacy. So, depending on when you walk in, you will be immersed in the middle of a sandy beach, a forest, or the snow-covered slopes of a mountain as a cast of people sing karaoke, flex their oiled-up, shirtless torsos, lie in deckchairs and comb their hair or flick through a book, or relax with a drink in one hand and a cigarette in the other, among other actions. Ultutupu’s portrayal of cultural hybridity and indigenous and colonist relations unfolds in a remarkable way when watched this way from start to end. Lelia itself is split into six loosely connected scenes, each one starting with a few lines of lyrics from Allure’s 1997 cover of All Cried Out and set amongst the mountain ranges of Mount Lyford Alpine Resort. In part, Lelia explores the story of an infamous 1977 Vogue fashion shoot at the Hotel Portillo Ski Resort high in the Chilean Andes in the early years of Augusto Pinochet’s dictatorship. Models and photographers with two million dollars worth of Fendi, Yves Saint Laurent, and Ralph Lauren furs, as well as piles of cocaine, were snowed in at the resort where they partied, gambled, took drugs, and had sex with each other and the rest of the wealthy resort guests until the weather cleared. During the partying, shots for the catalogue were taken with the models lounging around the ski field; Les Goldberg, the photographer, even tried to get shots of the models posing with Chilean soldiers based at a military mountain school near the resort. Once the camera film ran out, the models and crew secretly escaped the resort by bus one morning before daybreak or, if they could, they skied out dressed in the furs. The shoot ended up being one of Vogue’s most successful.

Ulutupu lifts the imagery of Lelia from this story. Everyone wears luxurious fur coats and hats as well as dresses and suits, and the film starts with sleaty and windswept weather, that later clears becoming sunlit with a cloudless blue sky - a pattern that matches the Vogue shoot being snowed in then clear enough to do the shoot and escape. A ski slope can be see in the background of the fifth part too, with a continuous flow of people riding the chair lifts and skiing back down. There is more to Lelia than this homage though. Ulutupu cleverly flips some of the tropes of his source material, and instead of Vogue’s uniformly white models, he casts a mixed group of Polynesian and Pākehā people from his circle of friends and family. Ulutupu also intersperses Samoan language throughout as the final karaoke song is sung in Samoan, and in two parts a woman’s voice (Ulutupu’s mum) narrates over the scenes in Samoan. Apart from one scene that is given English subtitles, where the same woman answers a phone call and has a brief conversation about transferring money and washing laundry, Ulutupu leaves these moments untranslated. In Ulutupu’s artist talk for The Romantic Picturesque, he explained that he found the decision of whether to give subtitles or not political, and he felt English could not convey the intimacy and context of his mum’s story; and for most Samoans, these things would be clearly understood. A hint of these feelings is nonetheless evident from the scene where Ulutupu’s mum walks on her own away from the camera through the snow and mist as her voice tells her story. 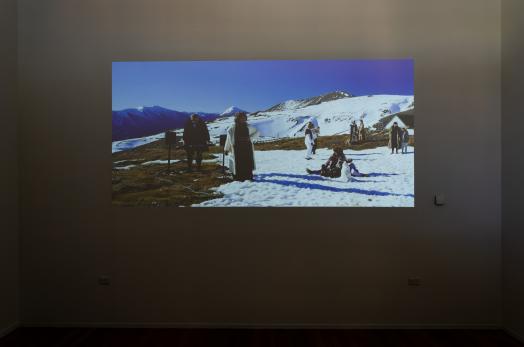 But this is the only part of Lelia that feels melancholic. Lelia revels in the drama, emotion, and subliminity of the picture postcards, power ballads and 90’s R&B, and the 70’s Vogue shoot that Ulutupu draws from. The opening scene, where a young woman sings karaoke to Olivia Newton-John’s Hopelessly Devoted to You (1978) over the wind and sleat, while a young guy stands behind a keyboard (he hits play on the track then stoically gazes into the middle-distance for the song), feels light-hearted despite the song’s deep sincerity and the freezing seeming mountaintop. The second scene as well, where Ulutupu’s mum continues her narration, has his mum and friends dressed in furs, with two small, sometimes restless dogs, striking unscripted poses for a shoot. At the end of Lelia, you can also hear someone laugh and cheer as the helicopter loudly takes off and almost wipes out the camera.

Ulutupu has talked about how each part of The Romantic Picturesque follows the thread of a romantic relationship between indigenous and coloniser. Into the arms of my coloniser reflects lust, desire, and courtship; Do you still need me? miscommunication, dissonance, and heartbreak; and Lelia a union or marriage. A sense of tension emerges from this narrative, heightened by the strained space in this relationship that Ulutupu responds to - the “diasporic hyphen space” as Chloe Geoghegan has put it. Ulutupu uncovers this throughout Into the arms of my coloniser and Do you still need me?, some parts feel tense, uncomfortable and surreal, while others are humorous and joyful. In Lelia, Ulutupu turns up the glamour, but this discord between indigenous and coloniser still underlies the film as the characters’ actions hint at an imagined union or marriage, and misunderstanding still emerges: as in the Allure lyrics that express heartbreak and silently bookend each scene. This union or marriage unfolds between the characters played by Ulutupu’s mum and dad. In the fifth scene, in what feels like the culmination of Lelia, they dance arm-in-arm together for a song amongst the snow and mountainous backdrop. The cast are gathered around them, and the young woman and man who performed karaoke before do so again, but the moment feels like theirs alone.

Into the arms of my coloniser (2016) Chris Ulutupu

With previous works Ulutupu has responded to and played with tropes associated with brown bodies, such as the romantic Pacific Island paradise widely disseminated in early twentieth century postcards and tourism advertising, and each part of The Romantic Picturesque is deeply layered as Ulutupu expertly collages these tropes into something that combines humour, celebration, and glamour as well as unease, surrealism, and sharp critique. With Lelia, Ulutupu’s choice to film in a dramatic, wintry mountain landscape plays on the supposed foreignness of this environment to the tropical beaches that Pacific peoples are usually portrayed in, and it feels triumphant. His characters, relaxed and suave in furs and white wedding dresses and suits, own the mountain with complete ease.

As an aside, if you have not visited Christchurch or the Physics Room for some time, the gallery’s recent shift, brought about by a rent increase at their former space, has now put them inside the Christchurch Art Gallery Te Puna o Waiwhetū building (where Form Gallery used to be), and a short walk from the Arts Centre, Toi Moroki Centre of Contemporary Art, and the Canterbury Museum. It has also given them a much more visible street frontage. So the move has brought the Physics Room the possibility of more visitors and foot traffic, and at the same time limited its ability to show the kind of large-scale exhibitions and installations that were possible at the old Tuam Street space because of its size. Forays into other spaces are possible though, like the recent Unconditional series where the Physics Room exhibited with the Ashburton Art Gallery, the Aigantighe Art Gallery, and the Suter Art Gallery Te Aratoi o Whakatū, or, closer to home, its use of the former Canterbury Cheesemongers building for its annual fundraiser. Ironically, because of high rents, there is no shortage of empty commercial spaces around the central city that could be used temporarily if an exhibition calls for it.