Everyday we share a physical relationship with the public spaces we occupy and the bodies we encounter as we move through them. These exchanges are sensory and tactile; on the sidewalk, on public transport, in the workplace, something is felt, experienced. The body has a language and it is constantly performing, negotiating and communicating according to its surroundings. Whether it be according to social, political or spatial rules, we have been conditioned to perform.

Being Space is a suite of four single channel video works which were programmed on Wellington public art platform Masons Screen from 22 June - 14 September 2017. Featuring work by Robyn Jordaan, Melissa Irving and Sriwhana Spong, each video utilised dance-based practices to explore ideas around the body, space and time.

Shown in sequence for a month (with the final two works by Sriwhana Spong programmed together as an alternating pair), each work encouraged and beckoned towards a new ontology where alternative physicalities and more fluid, abstract modes of communication are equally if not more important than language and the written word. Together, they asked; what social and political factors condition our performance in public space?

Masons Screen sits in Mason Lane, a public thoroughfare connecting Lambton Quay to The Terrace. A conduit between the government and business district of the Wellington CBD, Masons Lane is mostly trafficked by office workers moving between the nodes of work, lunch and public transport.

At the end of the Lane is a broad concrete staircase split into two uphill sections, one around a sharp turn. Bodies walk up and down, one foot in front of the other. Keeping to the left, there is occasional eye contact, or a “Sorry” when one body is accidentally brushed against another. It is a language, one that exists outside of words; a body knowledge, something we have learnt through conditioning and engagement within the architecture and it’s social rules.

The first work featured in Being Space was Robyn Jordaan’s The Present Continuous (2016).

In Jordaan’s practice, stage and costume are important elements, and The Present Continuous takes place in a public swimming pool.

Public swimming pools require particular body participation to occupy them and a social imperative to respect fellow swimmers. Backstroke, freestyle and diving are among the bodily movements commonly seen within these spaces, and social rules ask us to keep politely within the lane and rarely interact with others.

Dance is something that we do not expect to see in this context, particularly fully clothed and un-choreographed. In The Present Continuous a group of dancers wear individual and unique costumes reflective of the characters that they have chosen to portray. Each immerses themselves in the water and moves wherever and however they please within the space. It is important to note that swimming pools contain water, a substance both metaphorically and physically fluid. Drawing attention to the way the body performs according to its spatial conditions, Jordaan metaphorically challenges ingrained beliefs, ideologies and rituals of behavior that we may have developed through years of political and social conditioning.

The ultimate horror for a capitalist, western society rooted in facts and logic is fluidity. In The Present Continuous, the dancers are liberated to deconstruct the dominant roles required of the body, space and dance. Stepping outside of how society expects them to be and how their bodies must perform within space, they metaphorically and physically challenge ingrained beliefs and ideologies; they are fluid like water. Melissa Irving’s Being t(here) is the second work screened as part of Being Space.

It was first performed, documented and shown inside the café/reception area of The New Zealand Film Archive in Wellington in 2012. In the video, the glass window of the building exterior separates dancer Emma Coppersmith from the rest of the world. Performing in response to passers by, she floats in and out of the structured frame with ease. The dance style employed by the artist is interpretive, intuitive and responds to the movements of the outside world.

Being t(here) challenges ideas around the role of the performer and audience. Irving is not a decoration nor entertainment. She chooses whether she wants to be within the frame/screen, or outside of it. The public also have the choice as to whether they would like to participate as an audience or not; the work seeks to liberate both the artist and the audience. Dance as a method for engagement and a mapping of space and time. 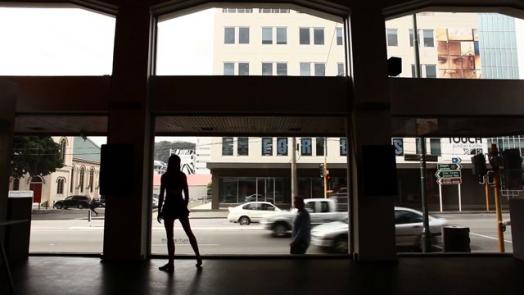 Using the camera to capture the body, Irving’s work transcends space and time. Displayed 5 years later on Masons Screen, Irving has adjusted the title from Being here to it’s Being (t)here, acknowledging the work will have different audiences, and that the work may be interpreted differently outside of it’s original context.

The final month-long slot in Being Space is occupied by Learning Duets (2012) and Beach Study (2012), two separate but complimentary works by Sriwhana Spong. In each work there is a shared theme of the body connecting to the natural environment; beckoning us towards notions of bodily presence, memory, fluidity and a more sensory engagement with the world.

In both works, the dancers respond to the spatial conditions of the site. It feels almost as if they have become a part of the space itself, a prop; with the conditions manipulating and moving the body, becoming a rock, then moving with the wind. The body engages with the space, blending in, negotiating and playing with it. The beach and the human body move together. There is an overall softness to the choice of costume, dancer and environment within these works. The dancers carry themselves with poise, yet there is fluidity in the movements. Much like a branch on a tree. The dancers leave behind traces. Traces are evidence of a bodily presence, an activation of space. In both of these works the dancer leaves markings on the sand, leaving traces behind, documentation of a presence, each just as temporary as the human body.

We all contain a bodily memory. These memories can be evoked and triggered through a plethora of different bodily experiences; the way that something feels on our skin, weather, sounds, tastes are a few examples. They are haptic and tactile and these sensations cannot always be put into words.

The use of the beach as a site for both of these works brings forth notions of fluidity relating back to the body. One could argue that the body has a language of its own that exists outside of words due to its natural makeup. The sea has a closer connection to the body than words and logic. In fact, the body is made up mostly of water itself; a fluid substance both physically and metaphorically. Much like Jordaan’s work, there is a liberation in Spong’s video. A sensory, embodied relationship with the world that escapes logic and rationality.

As human beings we constantly interact with the world. Various social, political and spatial conditions dictate how we move and control our bodies. In Western culture, rules, restrictions, binaries and the written word play a large role in how we interpret and understand the world. We are conditioned to perform and behave within spaces whether it be Masons Lane or a public Swimming Pool, and they require a different set of bodily rules.

Each of the works featured in Being Space encourage the audience to explore more porous modes of communication and to challenge and perhaps even dismantle dominant Western narratives, societal conditioning, ingrained beliefs and ideologies, particularly around space and how we are ‘supposed’ to occupy them.

In a world that places a high value on logic, rules, restrictions and the written word, perhaps a sensory and haptic response to the world and our surroundings is the ultimate form of rebellion.

Being Space was commissioned by CIRCUIT and Wellington City Council Public Arts for Masons Screen. Thanks to Eve Armstrong.