“Why do we remember the past but not the future,” Stephen Hawking asks in A Brief History of Time.

If Petra Cortright’s digital paintings could talk back maybe they’d reply, “Girlfriend, you know it!”

Cortright’s glitchy, giffy repertoire has painting’s back. Don’t have a brush, doesn’t matter. Just get it on the download. Her show at City Gallery Wellington RUNNING NEO-GEO GAMES UNDER MAME (i) sounds techy and complicated, but is it? Mame is an acronym of Multiple Arcade Machine Emulator - this open source emulator is designed to recreate the hardware of arcade game systems in software on modern personal computers and other platforms. Platforms like Petra Cortright’s output for City Gallery?

For a luddite like me RUNNING NEO-GEO GAMES UNDER MAME could be a metaphor and/or a literal description of the contents of Cortright’s City Gallery show. How would I know? Upstairs, her work is displayed across three galleries. The largest gallery is devoted to six frothy abstract paintings, hung in pairs across three white walls. An Artsy article dubbed Cortright ‘the Monet of the 21st Century’ - and the label has stuck. This flattering comparison is about his and hers flowers. Google her back catalogue and you’ll get the reference quicker than you will at City Gallery. That’s because this Wellington show isn’t designed as an introduction to her oeuvre, but instead offers an opportunity for the artist to cleanse her palette. (ii)

In the booklet accompanying the show curator Aaron Lister looks at Cortright’s latest paintings and animations as a partial rebuff of those persistent Monet comparisons. The flaw of this show is simply that it works best if you are already familar with her career. Cortright produces digital paintings as files that can be downloaded for the screen or the wall. Her six works at City Gallery are printed on linen and Sunset Hot Rag Press paper. They look like abstract paintings and are programmed to function like abstract paintings, but crucially they are not. Instead each image is made in Photoshop, composed out of images, filters and web effects appropriated from Pinterest, Google Images and other websites. 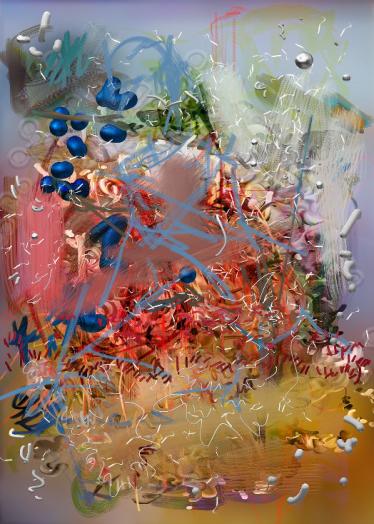 Maybe that’s why these works are so…‘Pinteresting.’ Each oozes a synthetic sheen. The two largest works on linen are pastels that err on the side of House and Garden magazine. Cortright is a self-professed Martha Stewart fan, who says her art isn’t gender driven yet her preference for Pinterest and the floral inevitably leads to feminised associations. But there’s virility on display too: blunt reds and petroleum blues dominate mathematicaVSSNEUEhorizons.phenix/over-pompeii (2016), whereas discountjockey@regressao.com.brOVRlyricsprings (2016) omits a liminal tan hue. What about those ugly cumbersome titles? Like reading code, like oil squeezed straight from the tube. The light in her digital palette is also askew.

In a recent Viva interview she said, “My colour palette is definitely very California, because the light changes all over the world and light is something that painters really think about.” There’s vim and vigour in Cortright’s paintings; a foreground, a background, and plenty of simulated brushstrokes. But the overall effect is one of arbitrariness. Something’s missing – but what is it? Paint?

Some might argue so. I recently attended Painting Rebooted, a talk and tour of the current McCahon and Cortright shows with Justin Paton, curator at the Art Gallery of New South Wales, and artist Andre Hemer. For Hemer, Cortright’s digital paintings are likenesses – perhaps to be liked? For Paton, Cortright’s digital paintings seem to offer something, that on closer inspection, they negate. Is this nihilism inherent to the work or is it our own? Cortright has been classified as a Post-Internet artist, but what her work really offers is a bad romance with Science-Fiction.

Hark – what’s that? The artificial tweet of a bird from another room. In an adjacent gallery three monitors line one wall, their cords drop to the floor. On each screen is a tiny animated scene: a unicorn paces an autumnal forest flirting with symbolism, birds dart in and out of an avalanche of snowy brushstrokes and tropical fish populate an impasto aquarium. Each flash animation functions like a screensaver. Pretty, gimmicky and gettable. These are the kind of simulated nature scenes that populate screens in Sci-Fi interiors, decorating our vision of the dystopia. A maple leaf twirls through the forest, her birds tweet on repeat, the fish blow bubbles and a sea urchin bristles in the corner of the tank. Cortright told Viva, “if you can’t enjoy something in two seconds, it’s not going to stick.”

The work in this gallery sticks. On the back wall is a slow moving video that brings new meaning to the old expression ‘watching paint dry.’ Stay with this green screen and it eventually fills with flowers. Cortright first rose to art world attention for her webcam self portraits. Three are displayed here too. In moodgoingup last november (2015) Cortright stares at the camera, wearing a designer paint splattered work top, a cartoony cloud of fire and smoke floats above her head. She exploits the inbuilt effects of the webcam, using the smoke cloud like an emoji, to denote ambiguous feelings and dreams. 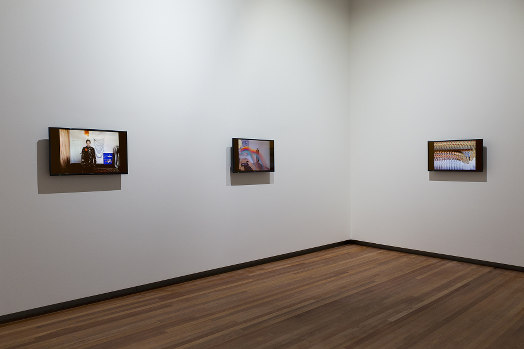 In 1968, Philip K. Dick’s Sci-Fi classic famously asked ‘Do Androids Dream of Electric Sheep’? But he didn’t ask ‘do androids make art?’ let alone specify if androids paint (and if they do paint do they paint electric sheep – or maybe androids, like Cortright, favour flowers?) These aren’t the algorithms Monet had to respond to when he twirled his brushes in turpentine, at home, in his garden at Giverney in the twentieth century. His vision only had to contend with cataracts. Cortright however is a next-generation Stella girl. Online, I watched her 2016 video collaboration for fashion designer Stella McCartney. Cortright twirls an arresting yellow trapeze dress that blazes in and out of fire. This is the artist bold enough to price her early webcams according to their number of hits on YouTube. It is this confluence of lifestyle, fashion and feminity in hyperspace that makes Cortright so watchable. Her website is another piece of work, buggy and humour ridden, follow the arrows down, down, down…

The unicorn subplot: bear with me. In Blade Runner (1982) Harrison Ford’s Deckard is haunted by a runaway scene of a unicorn bounding through a forest. He’s romancing the replicant Rachael, an ice-cool vixen in black pencil skirt, and militant shoulder pads, programmed to believe she is human. (In the future women are purpose built for pleasure and admin). Is the unicorn an implanted memory indicating Deckard himself is a replicant? Considering how much Ford has aged in the upcoming reboot I guess not. In mythology the unicorn could only be captured by a virgin. The unicorn in Blade Runner continues to activate some wild untamed place in the imagination, that can’t be corrupted. Yet it is not natural.

Nor is the stock dolphin that leaps through the oily orange waves in Cortright’s Clouds Over the Ocean_with_dark_painting (2017). Marooned in a bean bag you can watch this video projected in a blackened room and not know if it is past, present or future tense. Cortright’s digital paintings are built like replicants to satisfy our pleasure principles, her layered files complied from sites like Pinterest which dominate our leisure time and allow us to pin up our dreams.

She told Viva, “I find Pinterest is a website that’s mainly targeted at women. It is kind of like for women to construct their dream life, which is kind of cute but it’s also kind of sad, depending how you want to think about it. I think that sometimes a lot of women’s dreams get trivialised…”

Remember, in Blade Runner it’s the replicants who are born innocent. Kind of.

(i) Mame is  intended to preserve gaming history by replicating vintage games in their original form. 148 Neo-geo games were released from 1992 onwards; for a digital native like Cortright perhaps the very names Twinkle Star Sprites, Windjammers, Pop n’bounce and Pochi and Nyaa bring back warm fuzzy childhood memories.