At a moment when the declining quality of New Zealand’s groundwater is a pervasive and recursive societal problem, the recent Common Ground Hutt Public Art Festival set out to examine the city’s relationship to its waters: the Hutt Valley’s aquifer; its bore holes; Te Awa-kairangi/the Hutt River and its tributaries; Te Whanganui-a-Tara/Wellington harbour; and the ocean.

There are few things more laden with metaphorical potential and societal importance than water—it’s a big topic to tackle. Murray Hewitt’s work in the Festival, The Rising Gale, turned its attention towards the central artery (see, I can’t even start writing about it without using a metaphor) of the Hutt Valley: Te Awa-kairangi.

The relationship between Pākehā settlers and Te Awa-kairangi has been one of simultaneous engagement and containment. When the first, soon-to-be-disillusioned, New Zealand Company settlers arrived on the beach at Pito-One in 1840, they set up their huts on the foreshore and around the mouth of the river, near to the pā of Te Puni, the prominent Te Āti Awa chief. Their new dwellings, however, were soon swamped by the flooding river. Due to this inauspicious beginning to the colonial settlement, the settlers scuttled over to the other side of the harbour, to an area less prone to flooding. It wasn’t until the early 1900s when stop banks were built, that the suburb, now transliterated to Petone, and other areas of Lower Hutt, began to thrive. Though, only if you consider the rapid construction of industry “thriving”. It’s hard to imagine, in the grimy industrial suburb of Seaview, the once verdant, bush-clad valley, the river winding through it, and huia and kōkako singing in the trees. These histories filtered through the ambitious series of events that made up The Rising Gale. The fulcrum of the work was 25 minutes of drone footage which followed the course of the river from Taita, down the valley, and out to Matiu Somes Island in the harbour. Alongside the video, Hewitt invited various local musicians and writers to provide a soundtrack or other aural accompaniment, which was played or performed at each of the five screenings throughout the Festival, at the sites of boreholes and other significant locations along the river.

Each screening was radically different from each other. At the first, The Rising Gale was screened next to a borehole in Taita (which is where the Valley’s expansive aquifer is first fed by water entering the ground from the river), projected onto the side of a truck in a paddock right next to the river. The night was cool; there was a light wind and a very small crowd. The Taita College Poly Club choir sang beautiful waiata into a patchy PA. The second screening was in the gloriously 1970s auditorium of the GNS Science building in Avalon, where writers Gem Wilder, Damien Wilkins, and Helen Heath read writing about Te Awa-kairangi. The third, my favourite, was at the Gear Island Water Treatment Plant on a still evening, the sky flecked with stars, where the film was projected on a concrete wall with a roaring, glitchy sound accompaniment by local sound artist Jason Wright. The fourth was at rush hour at the Waterloo Railway Station with the Hutt Valley Community Choir—this screening unfortunately suffered from technical difficulties, as it was too light to see the projected film. The final screening was down underneath the Melling Link Bridge, the river itself slinking by, and with anarchic, atonal live band accompaniment (bass, xylophone, percussion, brass) by Ssendam Rawkustra and Mixmusicmania. 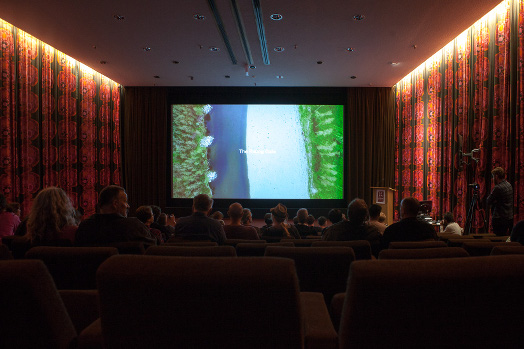 In the auditorium of GNS Science, the writer Damien Wilkins read a scene set on the banks of the Hutt River from his recent book Dad Art. In it, a character asks, skeptically, “What was Michael hoping for from this trip? To look at the Hutt River as if it might mean something to his father and to him?” The internal monologue of this character acknowledged the difficulties of metaphor and seemed to relate to the enquiry of The Rising Gale: if the Hutt River means something, signifies something, what is it and how can we talk about it? And how can the artist say what this river means, when it means so many different things to so many different people? In some ways, water is too rife with history and metaphor (what is more poetic than the idea of water slowly moving underground, seeping through layers of rock, and appearing near Matiu Somes Island, twenty years after it first entered the ground?), so how do you approach such a potent subject?

Hewitt’s response was to begin with silence. The drone footage of the river was rigorously simple and minimally edited. The film dispassionately tracked the river, which, seen from above, was abstracted by the mapping—like after takeoff in a plane, when you look down and the land looks alien, too ordered, chaotic life reduced to blocks of colour and the smooth patterns of roads. In this video too, the river and its banks slid past and became simple strips of colour. The landscape was blank, history-less, mute, a canvas to be projected onto. 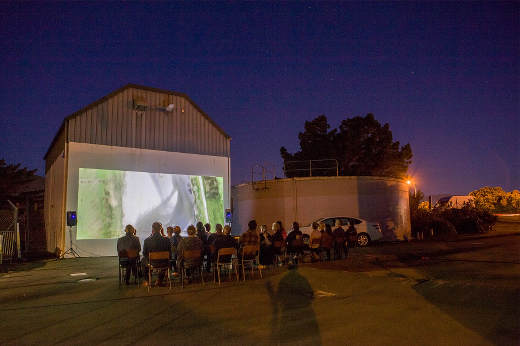 Onto this backdrop, each of the performers that Hewitt worked with, and each of the five locations where the film was screened, evoked a story of a different river; Te Awa-kairangi became multiple and continuous. For the Taita College students who sang at the first screening, I expect that the river is part of their every day lives as Hutt Valley teenagers in 2017. I don’t speak te reo Māori, so I can’t assume to understand all that was being said, but the river that their evocative waiata conjured up seemed alive and quotidian, rather than a metaphor for history. Conversely, the river the older writers spoke about at GNS science was examined through the distance of memory; they all grew up in the Hutt and the river is part of their tūrangawaewae. In the austere concrete surrounds of the Gear Island Water Treatment Plant the audience was reminded of the practicalities of the large aquifer that runs underneath the Valley, which supplies water to most of the Wellington region. Watching the film accompanied by Jason Wright’s soundtrack, the river appeared as a slick skin to the unseen, subterranean activity that bubbles underneath. For the Hutt Valley Community Choir, the river was source and inspiration for their aquatically-themed selection of songs and their sense of connection to their peers and environment. And in Te Awa-kairangi, the final performers Ssendam Rawkustra and Mixmusicmania saw chaos, randomness, and chance. As a whole sequence, The Rising Gale, demonstrated the multivalence of metaphor and how the Hutt River extends outwards, literally and figuratively, into people’s lives, homes, creative activities, and histories.

The itinerant and hetergeneous nature of The Rising Gale also unpicked the very idea of ‘community’ upon which the Common Ground Festival, and other festivals of its ilk, operate. The ways in which public art speaks to, and often attempts to speak for, the communities where it takes place during temporary public art festivals, can often be didactic. Collaboration is hard. And collaboration in a restricted timeframe is even harder. Hewitt, who has the benefit of living locally in Moera, worked with diverse groups and individuals—these were no art world insiders or solely members of that amorphous group, the “creative class”—and gave space and voice to their divergent responses to his work. During each screening, the central film oscillated between foreground and background, sharing the focus and audience with the other performers. Hewitt seemed to actively ackowledge the limits of his own point of view and suggest that communities are malleable, slightly incoherent, and porous. Groups of strange humans can’t be easily categorised by the area in which they live or the landscape that they relate to.

The Rising Gale also pulled scientists and groundwater experts into its inclusive events. At GNS Science, a groundwater modeller gave the audience a brief but fascinating explanation of how the Hutt River and the aquifer interact and the methods scientists use to measure this interaction. Similarly, at the Gear Island plant, a staff member from Wellington Water talked the audience through the aquifer’s supply and distribution networks and how and where the water gets treated. In some ways, these brief contributions acted as gallery wall labels, but were elegantly intertwined with the roving and collaborative nature of the work. So often, site specific art exhorts you to learn something about a place: an overlooked collective history, an impending environmental threat, or an element of built heritage, and this pedagogical element can often sit awkwardly within the artwork. The Rising Gale too, sought to expand our understanding of the Hutt River and its relationship with the aquifer and harbour, but this aspect was deftly contributed in Hewitt’s work by the intros from water scientists and infrastructure experts.

Hutt City Council, the New Zealand Transport Agency, and Greater Wellington Regional Council, are currently working together on the RiverLink project, which seeks to “deliver better flood protection, better lifestyle and improved transport links for the people of central Lower Hutt.” A new promenade along the flood protection banks at Lower Hutt CBD and a pedestrian bridge across the river are Hutt City Council’s biggest contributions and there is much talk of these developments “bringing the city to life”, and “helping focus the city centre on the river”. Public consultation has been undertaken, but, as with many civic projects, there is ongoing discussion about the expenditure and the benefits—rate-payers will not be mollified! I really hope that a member of the Hutt City Council came to The Rising Gale, because this artwork, more than a survey or meeting, sensitively showed how citizens of the Hutt Valley relate to and connect with Te Awa-kairangi; how they respond to it every day; how it acts as inspiration; and how it runs through whakapapa and memory.