The sound of a bellowing Hawaiian Ipu drum beat calls across the floor of Brisbane’s Institute of Modern Art. Turning a corner, you suddenly encounter a shimmering, hanging curtain of deep blue, aqua and silver tinsel. Looking adjacent reveals projected images of animated satellites. They jump, leap and gyrate to the beat of the master drumming teacher, the Kumu Hula. Eventually, the towers obliterate into pixels of digital confetti, until there are no more colonial intrusions left on the volcanic expanse of Hawaii’s Mauna Kea.

This is all in the latest work by Ahilapalapa Rands (Kanaka Maoli, iTaukei Viti, Pākehā), Lift Off (2018), a new commission for group show The Commute at the Institute of Modern Art in Brisbane. Picking up on the notion of commuting as a multidirectional trip which not only takes one to work but also leads one home, The Commute drew on experiences of “commuting cultures” as defined by James Clifford. Each of the eight artists in the exhibition were invited to “assert complex, wide-ranging, contemporary Indigenous experiences inclusive of both ancestral knowledges and global connections”. (i) The end result is eight solo projects centred of different knowledges from around the Great Ocean which fuse some revitalise customary Indigenous practices some use digital technologies and others look at ideas of refusal within contemporary art.

The Commute was a collaborative project led by Indigenous curators Sarah Biscarra Dilley (yak titˠu titˠu yak tiłhini Northern Chumash, Chicana), Freja Carmichael (Quandamooka), Léuli Eshraghi (Sāmoa, Irānzamin, Guangdong), Tarah Hogue (Métis, Dutch Canadian) and myself, invited as Visiting Curators during 2018 at the Institute of Modern Art (IMA) in Brisbane. Within this framework each of the curators worked with one or two artists of their choice. I worked with both Chantal Fraser (Sāmoa) and Rands. For Rands and I it provided an opportunity to extend our collaborative relationship which started on our previous project lei-pā (2017), an exhibition at ST PAUL St Gallery.

Rands is an independent curator, writer and artist as well as member of art collective D.A.N.C.E. art club currently living in London. More recently co-founding the Interisland Collective – a network of Moananui artists and cultural workers in London. Together the In*ter*is*land Collective runs MOKU, based at London art gallery Raven Row which “operates as a hub for Pacific creatives and our friends both based here in London and passing through.” (ii)

Well known for her collective collaboration, Rands is perhaps less known for her own artistic practice, in which she uses performance, video and storytelling to explore and articulate intersections of Indigenous experience. Having recently finished a residency in Banff, Canada as well as one in Hull, England much of her work reflects and shifts around processes of reconnection to her cultures, weaving contemporary with historical Indigenous knowledge. Her multidisciplinary style focuses on disrupting dominant social narratives and worldviews by prioritising non-hegemonic subjects and subjectivities. This is particularly informed by issues relevant to Indigeneity and investigating ways that settler colonisation has and continues to inform narratives and power dynamics in the Pacific.

Lift Off (2018) is an installation which includes a three-channel projection of three different animations made with technical assistance from London-based animator Fred K Tschepp and an Ipu beat or drum beat made by Rands’ Kumu Hula, Auliʻi Mitchell (and remastered by Nikolai Mahina) which provides a “beating heart” for the work [iii]. 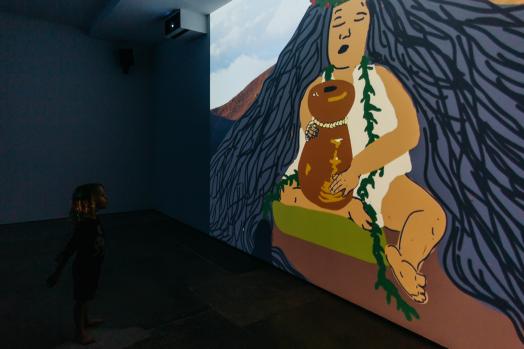 The central projection in Lift Off involves a woman sitting on the ground with flowing hair sprawled out across the floor. She is a Kumu Hula, beating her ipu. For Rands, hula has been an important point of connection to her late maternal Grandmother and her Hawaiʻi-based family who come from a strong hula lineage. But the Kumu Hula is not just playing for you, the audience member. Sitting to the right are two satellite images from the summit of Mauna Kea along with its many telescopes. Over time the telescopes start to move and shift across Mauna Kea to the Kumu Hula’s beat of her ipu, being uplifted and transported off Manua Kea before exploding into confetti. Not only does Rands imagine Mauna Kea clear of telescopes, she imagines Hawaiian epistemologies - specifically that of hula - to be the powerful forces by which the telescopes are removed. Following in the footsteps of a suite of Indigenous futurist artists from Turtle Island to Hawaiʻi, Rands' animation uses traditional practices to imagine radical change.

On another wall hangs the final component of the installation; 5 layers of tinsel, all different shades of blue and silver which runs a total of 10 meters. The tinsel picks up the energy from the air conditioner and the audience as well as the dim light from the projections. It is constantly in motion. A fun inclusion which riffs off camp aesthetics and a party hire vibe, the tinsel acts as a reference to kīkī, the glistening light as seen on the top of the Moananuiakea or the Pacific Ocean, an ocean which is inaccessible to Rands in London. The lo-fi replacement of something so profound as the ocean has a similar humour found in the dancing telescopes, an absurdity perhaps, underneath which remains a powerful message of solidarity. 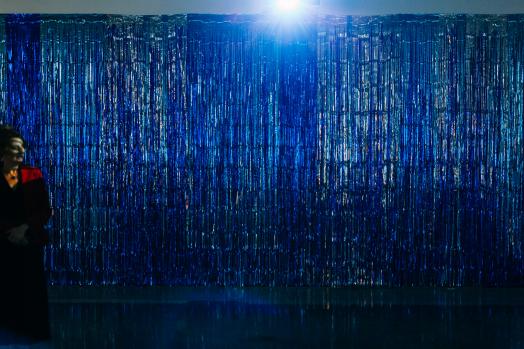 In the 1960s, the University of Hawaiʻi Institute for Astronomy provided the scientific impetus for the development of Mauna Kea into the world's premier site for ground-based astronomical observatories. Today, the summit of Mauna Kea in Hawaiʻi currently hosts the world's largest astronomical observatory, with telescopes operated by astronomers from eleven countries. Mauna Kea is also the intended home of the 'Thirty Meter Telescope' or TMT as it is known for short. A collaboration between Canada, the U.S., Japan, China and India, the TMT is set to be the world’s largest, most powerful telescope.

In 2014 the construction of the TMT was halted after it gained media attention as worldwide protests rose. Construction of the TMT was set to resume in April and later in June of 2015, however it was halted by protests each time. The Board of Land and Natural Resources approved the TMT project, but the Supreme Court of Hawaiʻi invalidated the building permits in December 2015, ruling that the board had not followed due process.

However, on October 30, 2018, the Court approved the resumption of construction.

Unable to protect Mauna Kea in person Rands explores what solidarity can look like as an artist working at a distance. In the first instance the work raises the profile of the call to protect Mauna Kea, introducing it to new and perhaps unaware communities. Drawing audiences in through its enticing soundscape and animations Lift Off is protest disguised as art intelligently operating on multiple levels. Because of this Lift Off also ensures the documentation of the Aloha ʻĀina Protectors into art history, this future proofs the conversation within another kind of media landscape, one which may prove to be disinterested otherwise – the canon. With the Aloha ʻĀina Protectors on the ground doing hard work Rands looks at what use her artistic training can play within this struggle.

Yet perhaps most pertinently, within such pervasive settler colonialism, the image of Mauna Kea free of satellites at the end of Lift Off is an act of radical imagination. The term radical imagination as written about by Robin D. G. Kelly in Freedom Dreams: The Black Radical Imagination (2002) is the concept of imagining a new future as the impetus for political mobilisation, specifically Black political movements. For Kelly, the radical imagination is “an unleashing of the mind’s most creative capacities, catalysed by participation in struggles for change”. In the book Kelly asks “What are today’s young activists dreaming about? We know what they are fighting against, but what are they fighting for?”, the answer in Rands’ case is Mauna Kea restored. While the context is undeniably different to that of Rands, Kelly’s radical imagination becomes a powerful lens through which to read the political function of Lift Off.

Ahilapalapa Rands' work functions on many layers but most of all it is a powerful act of solidarity. Through humour, imagination and hula, Lift Off confronts us with the realities of Mauna Kea and the ongoing protection struggles while transporting us to a new place where we are able to imagine a new-old version of Mauna Kea. The age-old question of whether or not political art belongs in a gallery space can of course be asked in relation to Rands’ work. I would posit within the context of The Commute, an exhibition full of artists reclaiming and revitalising cultural spaces and practices, it is vital to include the struggles the Aloha ʻĀina Protectors are facing. More so we are reminded of the artist’s unique ability to make real the unimaginable through images, images which within movements of intense struggle can provide a light at the end of the tunnel, a vision, a prediction. Lift Off is an important work which through radical imagination makes clear the political potential of art.

i  https://www.transitsandreturns.com/thecommute
ii  https://www.interislandcollective.com/moku-pacific-hq-london/
iii personal correspondence with the artist