“Lie at twilight down among the grass,

Let the brown gorse bend above you there,

Let the crushed fern tangle in your hair,”

These words open Juliet Carpenter’s video Ingénue with a slow inhale of breath. They are spoken by a soft, older voice - a woman’s voice. They are the first lines of New Zealand writer Robin Hyde’s 1929 poem Tryst, which riffs on the natural beauty and sadness entwined in romance and describes an almost universal longing. The languages of love permeate Ingénue and much of Carpenter’s work. The expression of love and emotion is pilfered from numerous sources; literature, theatre, music and popular culture and presented in film. Produced in digital video, her works often foreground sexual and emotional experiences, amplifying and exploring qualities of these narratives that are considered hysterical or disturbed. As such, female subjectivities feature prominently in these theatres of personhood. Her work is interested in the ways that individuals both produce themselves as characters and are also produced by others through representation.

The reading of Robin Hyde’s poem is layered over found footage shot through the windscreen of a moving car. Each phase of the driving sequence is illuminated by different artificial street lights; purple, blue, green, both theatrical and industrial. As the car moves through a generic urban landscape of bypasses and overpasses rain hits the windscreen and running droplets distort the view. Water pours down and patterns the glass. Frosted or semi-opaque screens and filters recur in Carpenter’s work, suggesting a motif of malleability as well as a search for purity or cleanliness, a desire for transparency that is difficult to sate. During this first sequence of Ingénue an animation is slipped into the scene, gradually taking over from the driving sequence. A computer-generated outstretched arm wrapped in a surgical cast slowly moves and rotates, floating and disembodied in a digital void. Names are written on the cast by an invisible hand: Grace, Julia, Benjamin. Generic yet personal. The act of marking a cast with one’s name is a recognisable schoolyard activity but here a darker subtext is suggested. Loving gestures of support and care are conflated with violent acts of branding and ownership. As this exposition fades the central sequence of Ingénue emerges. 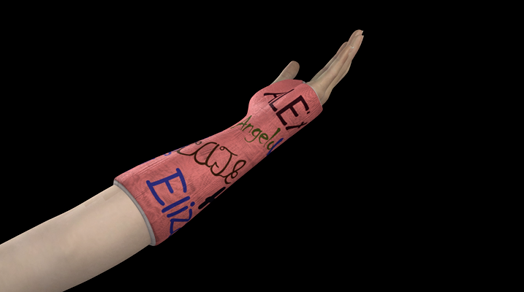 Under soft pink lighting a young woman readies herself for camera. She touches her hair and tries a range of poses; recognisable yet anonymous looks and manners. They read: girl, pretty girl, baby doll. The camera steadies, recording begins. Professional actor Greta Gregory takes a breath and begins an earnest, face-on poetic monologue, a text composed by Carpenter. Embodying the ingénue - the new young actress - Gregory’s performance is imbued with a raw sincerity which is at times uncomfortable to watch. She tests out or auditions her theatrical range. Her performance addresses a lover - “do you remember, that day out on the river, violet, sudor, vapour” - perhaps one of those named on the floating arm cast. The monologue calls back to Hyde’s text, placing love and sex in the natural environment. But while Hyde’s “purple dust” and “lover sea” meld easily with Carpenter’s airy, sweaty and languid world, Hyde’s down to earth brown gorse and crushed fern are replaced with “skin cindered calcine beneath our late summer’s sun,” replaced with an atmosphere that burns without sympathy. The rainy motorway that opens the video - both dreary and brilliant - also suggests a world inherently different to Hyde’s. Carpenter’s method of combining found and newly shot material is indicative of this new world and of the current textures of contemporary video production.

The use of spoken poetry or the crossing of poetry with performative dialogue also irritates at the traditional form of video - of both narrative cinema and ‘video art’ which is the arena in which Carpenter’s work appears. In Ingénue, like Carpenter’s larger body of work, the medium of video is always complicit if not explicit in any ‘message.’ Carpenter often references the way that historical image technologies and processes are fetishised in contemporary photo and video apparatuses. Her work is full of filters, manipulations and ‘special’ effects. Where many of these phenomena were once the outcome (desired or not) of chemical or mechanical processes, today they are used to produce authenticity and legitimise - by connecting to a legacy or past - image making and consumption and activities of identity making that are implicit in them. In Ingénue animation, found footage from the internet and various post-production effects coalesce in a style reminiscent of collage. This practice connects to Carpenter’s interest in personhood - in the fragmentations and mutations of character and the search for pure or authentic character or pure or authentic love - of oneself or another.

This quest is most readily audible in the film’s dialogue and the split between Hyde and Carpenter’s narrators. Hyde’s narrator’s ‘tryst’ is elegant and polite:

“Lips that kindle into holy speech;

Whisper but again the words I teach;

Arms that hold you give you but again

Shadow of our splendour and our pain.”

Carpenter’s ingénue, conversely, will not whisper, will not let her pain be sketched into a shadow:

“bust the windows out my car baby

but don’t take my bonehead to the club

take it to your thighs and verse a be,

The character portrayed seems to want to be consumed by her love but to also consume her innocence, to become sophisticated and cunning. Carpenter’s film showcases the limitations and boundaries of female performance in cinema, while also satirising and cracking at the stock character of the ingénue. Gregory’s performance wavers in multiple directions, from child to seduced to cynical temptress. As her monologue gains momentum and vitriol and begins to tremor, footage is intercut of a male sword swallower, performing his routine. Gregory’s ‘female’ show clashes with the internally violent performance of the sword swallower who is characterised by his physical strength, his ability to consume the sword, rather than the ingénue’s test of purity and restraint. As the work draws to a close, the dramatically heightened tenor crescendos with an operatic soundtrack. With its thirst for weak and wounded women, opera is perhaps the medium most known for its employment of the ingénue. In this climax images flash in front of our eyes, illuminated by the flare of a camera. The camera operates almost like a gun firing rounds. The images are shot, processed and fold away before another appears. The ingénue is frozen and made into image. But this is an image that can be re-shot, re-made. Carpenter’s weaving of Robin Hyde’s poem into this work is no accident. The writer has largely been ignored in New Zealand literary history until recent years but new scholarship has revealed her as a character whose difficult life and experience of gender politics marks her work with particular significance. Hyde’s life was hard. She was no ingénue. Carpenter’s work utilises her old-world romantic longing and fragments it through her own text and Gregory’s performance. Amongst more harrowing and hellbent wishes, more honest urges and desires, Ingénue still cherishes a romance true, even sentimental.

Life’s long kiss against your eyes is mine.”

Nathan Pohio, Let it be to a Lofty Mountain, Christchurch Ar...
END_OF_DOCUMENT_TOKEN_TO_BE_REPLACED