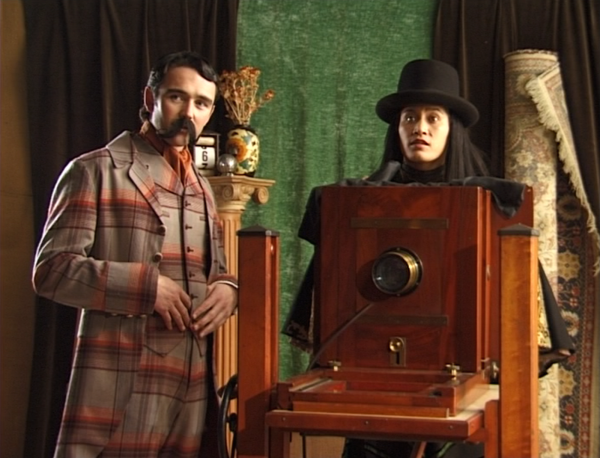 I come ashore at Te Uru after a drive from the central city, where I am greeted by Lisa Reihana’s troubling Silent Karanga (2008) in the new gallery window, and drawn in-land by the building’s curved entrance. I am a Pākehā visitor to a show that is defined by Barry Barclay’s ‘camera on the shore’. Walking the shore is commonplace in this country. But are we looking out, or in? Who are ‘we’ here? What are we walking on, or along? And how far does the shore extend in time, place, and, well, film? I must pay attention to my feet, to the passageway of sound and image, to being moved by ambient space as much as moving through it – the curator’s current. Barclay’s notion of ’hui on film’ is also referenced, and must therefore involve tikanga: instructions are provided at the show’s entrance by Barclay and Merata Mita in the form of short film excerpts (there’s a handy Reader of their writings to help). Their voices carry across the darkened ground floor area and seem to follow you. I am walking with giants. You have to listen up.

I walk up to Robert George’s 5-panel digital display of his tūrangawaewae (Horohoro, south of Rotorua). Empty of people, the film-work makes all the more present its' past, and the change that the place has undergone. The digital effect is one of enduring simultaneity – the changing elements of place yet have their duration (including roads, school, chairs, marae, whakairo, a horse, house and whenua). I try to people the panels, before the looped film starts to flicker, becomes inflamed, burns up and go black. Perhaps a mission impossible for the outsider (my instructions get burned soon after I receive them). I am made aware of the material image, and how time and place are also a colourscape, socially and historically saturated. The emptiness of this imagery takes me away from the noise and traffic of Auckland city to a place whose presence emerges in film, one that is still, certain, and ashore, if not assured. It soon passes in film, and yet feels more insistent, still present, than transitory. It is just the film that is transient. 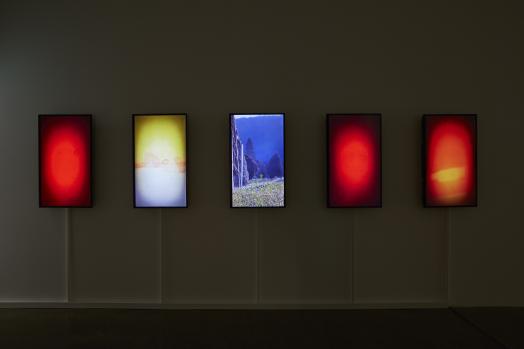 A sense of filmic ground is palpable in Nova Paul’s film-kainga Ko ahau te wai, ko te wai ko ahau (2018). We follow our feet along stream and bush, looking and listening in, immersed in sounds of birdsong and running water. The intimacy of this immersion creates its own attention, or call for attentiveness to whenua – a ‘dwelling’ in both senses of the word. Close-up, foaming water creates a white-out, overwhelming our capacity to see, or stand, outside. The film is not pointing out, or even pointing in, but manifests the attributes, qualities and properties of place. This is a sensory shore of sound, colour and movement. Its duration extends before and after its more recent conversion into property. This is not so much the film ashore but film as shore, work that shores up, and thereby heals.

This history of its conversion into property title is recounted on a small screen on the next wall Ko te ripo (2018) by whanaunga and historian Dinah Paul, who describes the loss of her community’s land (panoho whenua) through the imposed jurisdiction of a settler legal regime – the hapu lost land through the imposed necessity of property survey they could not afford (‘they came, they saw, they took’). She counterposes this account with the korero of tupuna, ‘exhibiting’ local knowledge that is materialised on the adjoining screen. Nova Paul has taken instructions to walk the ancestral Waipao puna, which provides in the embodied experience of its full wall screening ‘evidence’ of another kind. Land and water elements make present a holistic and non-legalisible being, which insists, irrespective of dispute, on its own passageway, and, in the time of its movement, on the right-of-way, as Barclay would say, of kaitiaki. I will shortly find Merata Mita cited upstairs: ‘If your films don’t heal, there’s no point in making them’. In this work’s listening, and in-dwelling, lies ‘the way of rongoā in the wā’.

Leaving the immersive sound and lightscape of the ground floor, I take a sharp turn and climb stairs up the building’s coast-facing side. The glass wall provides a large vista; the steep stairs mean you have to like heights. But the next level galleries, where From the Shore continues, are cut away from the ground floor by the new building’s modular construction. The sheer walls, spare space and concrete floors also seem unshore-like. No sand beneath the feet, or lapping water or sea breeze. It’s perhaps fitting that you should there encounter Lisa Reihana’s Native Portraits (1998), reversed ethnographic vignettes of Māori sitting for, speaking about and back to European nineteenth-century photographers (‘this earth and that tree’ by the river, says Wikitoria Te Amokura to Mr Barnes, ‘still belong to us, and we to them, so far’). The artifice of the photographic studio and stage scenery is both betrayed by the actors’ presence and korero, and compounded by the rectangular room and box-like building. One cannot help but speak the language of this building’s architecture, which make the hui of the show a disjunctive, and yet interrelated, gathering. Indeed, the multiplicity of curatorial associations extends the kaupapa of the shore.

If Reihana’s revisited studio questions the visitors’ exhibitionary practices, Tracy Moffatt’s adjacent short films Night Cries: Rural Tragedy (1990), with its ghostly history of adopted white parentage, and particularly Lip (1999) and Other (2009) question the construction of Hollywood’s ‘other’, either loyal and subservient helpmate or exoticised and commodified object of scopophilic desire. With reference in ‘Celebrating Fourth Cinema’ to Mutiny on the Bounty (1962), which appears at different moments of Other, Barclay objects to the distortion and degradation of Indigenous peoples and practices by First cinema. A more real and complex shore is staged in Reihana’s recent In Pursuit of Venus [infected] (2015-2017). Although Reihana and Moffatt reverse and challenge the Western gaze, their works here are more filmic disassemblies than immersive in form and feeling, and stand apart. Deliberately stilted and jarring, re-appropriating and re-appraising historical appropriation, the moment of these works seems earlier and different from the contemporary fluidity of the present past in works by George and Paul, and next, Tanu Gago. Visitors to the shore may be walked back, but the shore, too, proffers its own grounds.

In Tanu Gago’s must-see phantasmagorical filmwork in the next gallery APPARATUS (2018), the shore is altogether fluid. Looking in, the surveilled shore is a binary of paternal law and police order; looking out, sexualities mix and meld. If APPARATUS references the colonial state, urban environment or even art industry, the filmwork is an elaborately choreographed dance of identities in both everyday and stylised settings. In this beautifully constructed work of sound, colour and movement, the shore becomes again shifting ground of self-assertion and crossing, un-making the historical occlusion of fa’afafine, and foregrounding both queer and distinct Polynesian identities. 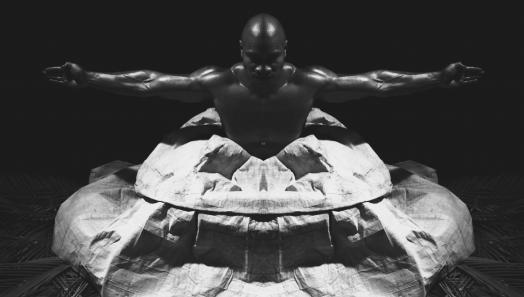 More than reversing the gaze, and exposing the exhibit’s materials, this most contemporary work enacts its own gaze. It is both a parade and journey of masculinity, which both shows and refuses binary binds. In rhythmic and mesmerizing episodes, a young boy is immersed in wind-blown fabrics, blowing bubbles, his future open; a group of slightly older boys look defiant and kung fu-fight on a surburban house trampoline; now adult men by turns challenge the camera and assumptions about themselves; scarf-veiled youth burst into dance; and sculpted men with oiled bodies move in modern-traditional forms to the sound of tatau. Through voices that recall colonial prohibition (‘young woman, who were proud of their bodies, were taught to be ashamed), parental concerns (‘where were you last night’), urban commotion (‘what is the charge’) and past memories (‘I remember how it was’), this film ashore reforges lineage and community. Reverse othering the ‘straight’-jacket of Western desire, archived by Moffatt, Gago’s work is delicately mutinous.

Tucked around a concrete corner in the level 2 gallery is the highly sociable work of Tuafale’s Tanoa’i (Aka Linda T) and LTTV (2009). Two comfy chairs, situated in a welcoming space behind a rack of clothes and several cameras, invite the visitor to sit down and chat with Linda herself, which is live-screened on one of six screens with different content. This community of practice involves communing with the practitioner, and adding one’s name to a blackboard of those-who-have-stopped-by. This community is multiplied by the links between the live screening of these same visitors, and those appearing in the past and present interviews on other screens. One screen shows Linda’s on-the-spot interviews with participants in the ‘One Country, Two Laws’ symposium held in Auckland University’s Old Government House in 2006. Surveying the walls of the house, decorated at the time with pictures of its own assumed governance, speaker Tainui Stephens makes reference to life’s ‘merciless irony’. To make film and television, says Stephens, you had to work within a white system decried by Barclay in A Pistol on the Table, but then, he adds, ‘to be whiter than white you must really be brown.’

In conversation, Linda herself recalls being a gopher for the coterie of activists, intellectuals and filmmakers who surrounded Merata Mita in the 80s. The there-ness and now here-ness of Linda T’s film-work and person extends the active and creative whakapapa of Mita, Barclay and Ngā Tamatoa. For visitors like myself who may know little of this earlier context – a well-spring of radical energies that shape Indigenous Māori and Pasifika media practice today – a documentary on a further screen offers a sequence of intimate tributes to Mita’s mentorship, generosity of spirit and influence. In her multiple roles as director, producer, teacher and critic, her fierce energy, care and humour, noted by Ella Henry, Heperi Mita and Peter Turei, among others, the documentary exudes mana wahine (in Linda T’s couch-cam screen, Heperi describes the anger and pain of having to pay TVNZ for the image-property of his mother to make Merata: How Mum Decolonised the Screen (2018). Mita imagined an industry, and media practice, which would not require Māori and Pasifika media artists to whiten themselves to make film, and which would use the camera, as Barclay tells us at the gallery entry, with ‘confidence … humility, grace and aroha’. The exhibition welcomes visitors to this shore.