Smoke exhales from a pair of matte pink pipes; a young woman sways against a white washed background, the soft caw of seagulls rising. Last year Yvonne Todd produced two hypnotic moving image works. Smoke Emitters debuted at Sydney Contemporary in September and Denim Seagull featured in Gentle Disco, her last exhibition at Ivan Anthony in November. Moving image is a new medium for Todd, she’s known for highly staged colour photographs of flora and fauna, vegetables and frequently fictitious young women. Smoke Emitters and Denim Seagull continue to transmit on a distinctly Todd frequency: where what’s not quite right is also not quite wrong.

Yvonne Todd talks about provocative metaphors, objectum sexuality and how to know when your artwork’s too silly.

MD: What led to the realisation of your first moving works in 2013?

YT: Although I shoot large-format film for my still images, I bought a DSLR camera this year and it demystified the making of moving image work. It’s like operating a camcorder – it seems almost too easy. I’ve got 20 years of photography experience so I have a solid understanding of exposure and lighting, which has been helpful but I’m not really much of a digital wolverine. I’m used to shooting on a clunky old 4x5 view camera that’s falling apart. 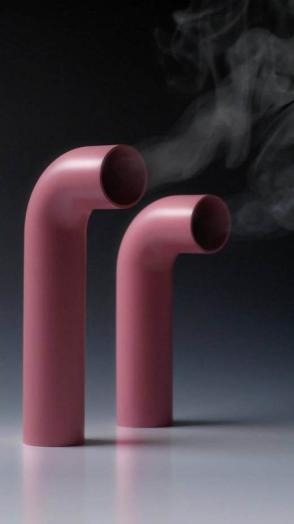 Still from Smoke Emitters (2013) Yvonne Todd. Courtesy of the artist.

My first idea for a moving image piece was Smoke Emitters (2013). I came up with the idea several years ago. It started off as a still image, but I wasn’t satisfied by it as a static object. I wanted to make something slow and hypnotic, and the simple idea of slow-motion smoke emerging from the pipes seemed achievable. I perceive much of my work to be fragments and glimpses, an avoidance of the definitive. That moving image can play into this is appealing. I’ve always been apathetic about introducing narrative into my work. I lose interest quickly and find structure restrictive and claustrophobia-inducing. To be able to avoid narrative and emphasise stasis in moving image is exciting to me.

MD: Can you describe the genesis of Denim Seagull?

YT: The work started as something else: there was no denim and no seagull. A few months ago I became obsessed with an expensive vintage designer dress that had an interesting formal ‘cultic’ quality. It looked like the uniform of an obscure but stylish sect. The dress was for sale through a dealer in LA and I became convinced it was the key to my next video work so I purchased it, the expense of which makes me now shudder. The video was going to be a simple ‘portrait’ of a young woman wearing the dress, with minimal movement. One idea was that she was to have water dripping slowly from her cupped hands whilst maintaining eye contact with the camera. I was sure it would work. And the dress would be the star.

I took another dress to the shoot as a backup, a tie-dyed denim number that had caught my eye at Savemart. It cost $9.99. After shooting multiple clips with the first dress, all of which seemed pretty successful, I asked the model to put the denim one on. It was immediately better. The movement of the tiered denim and the bleached, painted-looking fabric seemed much more compelling. It still had the cultic feeling I was hoping to impart. Denim Seagull consists of the last clip I shot on the day. The title Denim Seagull wouldn’t go away, so I started listening to audio files on various online sound libraries and found one described as ‘seagulls kipling’ which had an understated flavour. The occasional twitches of the model seem to align with the intermittent seagull noises. This pleases me.

MD: Your titles are always so distinctive and often peculiar, off kilter. How do you come up with your titles and how do you know they are right for each work?

YT: Words – titles are as important to me as the images. The best titles are the effortless ones plucked from the ether. Sometimes a title will have to wait around for a work to be made. I write everything down, hoping to ascribe a purpose at a later date. I’ll go with whatever feels right. Sometimes a snazzy title will be the best thing about the work. I try not to let that happen too frequently. (When Robert Leonard was selecting images for my upcoming City Gallery Show, he ejected an older photograph from the shortlist saying ‘the best thing about that is the title’.)

MD: I know you are a Hitchcock fan - did you think about The Birds at all when you made Denim Seagull and what aspects of Hitchcock's work are of interest to you? Are there other films/moving image artists that have been of relevance to you in the construction of these works?

YT: Yes, Hitchcock is a favourite, a master of the psychosexual drama. What’s not to like? But I don’t consider my video to be comparable to The Birds, which is deeply sinister, with forces of nature running amok and eyes getting pecked out. The seagull sounds in my work are communicative, expressive of something. The seagull is aligned with the young woman; it could be the voice in her head, there’s a shared experience emerging.

When I’m making work, I don’t really look to other artists; the absorption of ideas comes when I’m not actively looking to be influenced. I like to make things up as I go, often not really knowing how it’s going to end. That’s what keeps me interested.

MD: So far the moving image works are closely related to your photographs - rather than radical stylistic departures - the potential for movement/action has been harnessed with restraint.

YT: I’ve always attempted an element of restraint in my work. It didn’t feel appropriate to launch into a radically different way of making and conveying ideas. I’m already using lens-based media, so it doesn’t seem that different. And I’ve been presenting my moving image works on framed flat screen televisions, so they look like still images at first.

MD: When I studied art history at University Barbara Kruger was a massive figure for manipulating advertising images into Feminist slogans like: "We won't play nature to your culture."  The young woman in Denim Seagull has an odd relationship to the natural world.

YT: Photography has always appealed to me because it allows for such interesting convergences of the artificial and real.

I’m interested in the various iterations of these connections. Creating images satisfies my need to manipulate the conventional and familiar, to create ‘revised’ photographic conventions. That’s why I often borrow from the world of commercial photography – product shots and precise, sharp images.

MD: Smoke Emitters reminds me of a very pink flushable commode my Barbie doll once owned. I see a direct relationship to your previous photos Pipe Study (2008) and Sick Pipe Arrangement (2007).

YT: (I didn’t know they made a Barbie toilet. You had all the good toys).

The plastic plumbing pipe is a recurring object that could be male or female. I see it as a stand-in for a human; an anthropomorphic device, vaguely suggestive of objectum sexuality – the attraction to inanimate objects. The pipe also works as a sculptural presence, an abstract element.

There have been several recurring motifs in my work over the years, sometimes it’s the styling and wigs and costumes I’ve used, backlighting, false teeth, the commercial high-rise buildings of Auckland’s North Shore, disembodied legs clad in prim shoes, objects including food – there’s currently a vegetable theme emerging, beach detritus, and the pipes. I will keep revisiting and revising these motifs until I’m done.

MD: New Zealand obviously has a history of Gothic art and literature and I'm aware that works you've enjoyed like Flowers in the Attic are gothic in nature. In Gothic art the site of the 'house' is often spoken about as a metaphor for the human - especially female - body. Do you see your work as Gothic or respond to that term or does it feel limiting?

YT: I’ve never strived to fulfil an idea of the Gothic, but there’s certainly a Gothic undertone to some of my earlier work. The Book of Martha (2003), a particularly bleak series of photographs that included an anorexic self-portrait, springs to mind. And Asthma & Eczema (2001), which was inspired by the anaemic roses on Hallmark sympathy cards and the novel Flowers in the Attic, which I read during adolescence. The book was about an incestuous teenage relationship, imprisonment, religious fervor, and starvation. And ballet. Although it hasn’t really shaped the content of my work beyond the earlier material, reading it was a formative event.

To me, the making of work that is consciously or singularly ‘dark and disturbing’ seems an easy route and one that is a bit stale. I’m certainly not adverse to a provocative metaphor, though.

MD: We've discussed the importance of silliness a lot in the past. Can you talk about humour in your work and how you decide when something is too silly?

YT: I feel vaguely ridiculous most of the time. This overflows into my work. I don’t strive to make funny work, but when I attempt serious, solemn photographs, laden with gravitas, they just seem so deeply wrong. Yes, things can get too silly. I wanted to call a recent show Squirrel Junction but decided against it for that reason. I would reject an image as being silly if it felt like a hollow gesture or stunt that didn’t provoke or offer up anything more than its face value. The pitch or tone has to be just right. But images that could be construed as silly can work when juxtaposed with other images. Sometimes it pays to wait and see. MD: What further plans do you have for moving image work?

YT: My next idea is more technically challenging. It will hopefully involve a group of figures – headless, handless, moving together in silent syncopation. It will mean the use of chroma key and post-production work. I’d also like to make use of the dress I intended to use for Denim Seagull but didn’t. Lots of the ideas I’ve come up with are clichés – clouds, waves, fields of wheat or grass rippling in the wind. How can I make these interesting? And does it matter if they’re not?

YT: I’ve got an exhibition of new work opening at Peter McLeavey Gallery in early March. This will be a selection of object photographs. The working title is Nutritional Studies. I’m also hoping to exhibit more photographs by my second cousin Gilbert Melrose (1936-2008) who operated a photography business in Matamata for 47 years and left an obsessive archive of many thousands of negatives, mostly of tractors and farm machinery, landscapes, sunsets, hot air balloons, steam locomotives, tourist attractions, farm animals, and anything Christmas. To me, Gilbert’s work is a celebration of being in the moment, the enjoyment of capturing images in a free, spontaneous manner. But still totally obsessive, and that’s why I relate to the work – and him.

Later in 2014, I’ll be having a major solo exhibition at City Gallery Wellington. The show is an extensive 20-year survey. I’ll be working with the curator, Robert Leonard, on this for most of the next 6 months as it will be by far my biggest and most ambitious project to date. I’ve also been working on a new series of portraits for this exhibition. The series is called Ethical Minorities (Vegans) and to date I’ve photographed 17 vegans including couples and families. It’s been a really enjoyable project.

Watch Denim Seagull on CIRCUIT. Essay commissioned by CIRCUIT as part it's 2013/14 Summer Reading Series. See Yvonne Todd's tumblr and website. Megan Dunn is an independent writer based in Wellington.