“Articulating the past historically does not mean recognising it ‘the way it really was’. It means appropriating a memory as it flashes up at a moment of danger” - Walter Benjamin.

In January I was invited to the Bangkok Experimental Film Festival to take part in a series of screenings and talks addressing two divergent topics; home movies and Artists Cinema.

Curated by London-based Thai Film Academic May Adidol Ingawanij, Raiding the Archives was the 6th biannual BEFF. Implicit in this years theme was the tension that so often exists between a public hungry for access to images and those charged with protecting them. At BEFF 6, the subtext proved to be even more complex, addressing issues of collective memory and political power. Day 1 began with a series of presentations at the Thai Film Archive around the question 'What is an Archive for?'

Thai Archivist Chalida Uabumrungjit outlined practical issues of preservation and storage. She noted that requests for access tended to focus on well-worn examples of iconic footage. How to encourage wider use of the collection? In response I gave an overview of the live music and film series SoundTracks (2002-06), which invited artists and musicians to re-work images from the collection of the New Zealand Film Archive. At this point Chalida voiced a familiar archival concern; “Was such a project disrespectful to silent images?”

The British Film Institute (BFI) emerged out of the Adult Education movement and focussed it's activities on archiving a British film canon which followed the development of film technology. They offered a small selection of titles for distribution which they insisted be shown chronologically. New York's Museum of Modern Art (MOMA) established a circuit of screenings in clubs and societies across the USA. Acquisition of titles for their film library was driven by a research interest in the relationship between media and democratic institutions, and their collection included both local and foreign works. MacDonald concluded by bringing the conversation into the present, asking - “In an age of abundant images, which films should we show today?”

Irish historian Ben Anderson turned up the heat of MacDonald's question, noting the difficulty of accessing politically delicate material held by Archives in the South-East Asian region. He asked 'What images in the Thai Archive remain censored?' Given Thailand's history of military coups, royal privilege and suppression of protest with force, this was not a benign enquiry. The Archivists response was diplomatic but non-committal; it was their responsibility to collect everything.

Perhaps the most politically sensitive image in the festival lay outside of the theatre.

Occupying the forecourt of the Bangkok Art and Cultural Centre stood a large Royal Thai Army truck. Ostensibly a reference to an 8th floor exhibition of photos documenting the armies role in the post-flood clean-up, it was also a thudding reminder of who wields the balance of power in Thailand. 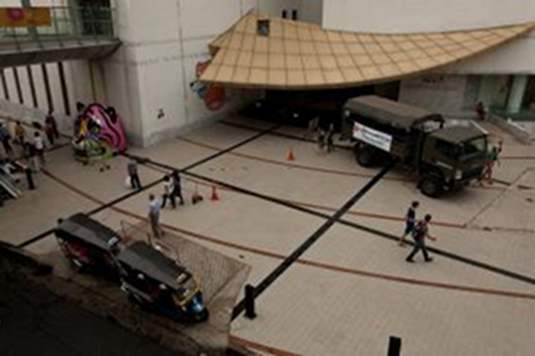 While the siting of the military vehicle on the cultural centre's forecourt was hardly an invitation to radical artistic perspectives, some hope lay over it's shoulder in the giant MBK mall, where thousands of pirated software DVDs openly changed hands for a fraction of their cost. If art was to have any efficacy in political protest, Thai film-makers were being given the tools to do it cheaply.

Inside the BACC, the open-call section of the festival had invited submissions that resonated “with Walters Benjamin's sense of history as sudden illumination and potent force against the oppressive weight of a mythic past.” A Brief History of Memory chronicled a mother recounting her son's violent death. Explaining the impetus for his movie Thai film-maker Chulayarnnon Siriphol said (via translation) “I wanted to make a film about the 2009 massacre because it is the one that is often overlooked”. Later I learned that A Brief History of Memory had sparked debate amongst some members of the audience, who found the films focus on a family with a rival political affiliation to be too neutral.

It wasn't only Thai film-makers who answered Benjamin's rallying cry. Amongst the many highlights from Asia, Europe and Australasia were Hanoi DocLab, who presented two documentaries observing the dispossessed urban classes in contemporary Vietnam and the legacy of military conflict. Australian film-maker Dirk de Bruyn recut an Australian newsreel to critique the white Australia policy of the 1950s. DeBruyn acknowledged the influence of the structuralist movement on the film, which he described as a “war between the critics and the artists... I think the critics won”.

The most charged screening at BEFF was Bernadette, a portrait of Northern Irish political activist Bernadette Devlin, by British film-maker Duncan Campbell.

On the surface the presentation of Devlin's firebrand activism seemed an obvious corollary for the packed audience of mostly young students. Yet was Campbell's citing of Devlin's quote from her autobiography “I make this not as a political manifesto, but as a record of how I came to be” more a plea for the kind of humanism exhibited in Chulayamana's film? How did this read in the Thai context?

Historian Ben Anderson and Thai blogger Aan from www.readjournal.org were asked to offer their interpretations of Campbell's film. However, this response was simply too long, and combined with the live Thai to English translation I felt the energy in the room start to wilt. My sense of dismay eventually gave way to wondering if this occupation of the floor might be deliberate. Was it perhaps safer for an older Westerner to discuss the political problems of another country from another era, leaving the rest to allegory and discussions outside the building?

Earlier in the Festival I had presented a 2010 paper written by New Zealand film-maker and archivist Kathy Dudding entitled Tracing the Flaneuse: On early women cinematographers. The essay focussed on six women who filmed domestic, urban and rural spaces. Thinking back to Dudding’s essay now and some of the undercurrents of BEFF, I am drawn to her quote from social scientist Janet which asserted that women were traditionally excluded from public space and 'sentenced to containment and silence’. Clearly such imbalances of power are a situation that the organisers of BEFF have worked hard to counteract. However, like many political situations viewed from the outside, I suspect some of the subtext of BEFF lay in what was not said.

Nathan Pohio, Let it be to a Lofty Mountain, Christchurch Ar...
END_OF_DOCUMENT_TOKEN_TO_BE_REPLACED