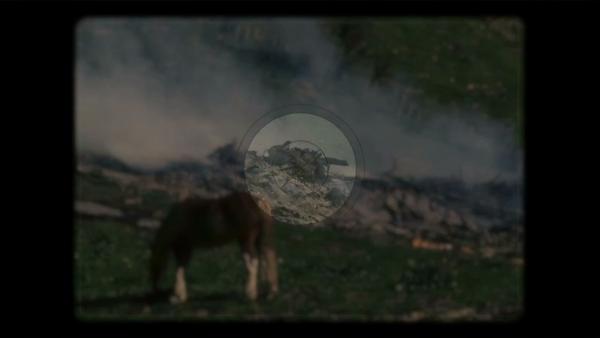 Dark Light is a beautifully difficult work. What seems to me the most difficult, but also the most beautiful thing about it, is the gap it produces - insists upon I would say - between its dense text and its intense imagery. The film immediately confronts us with the problem of how to reconcile the two, but rather than providing us with an answer it instead presents this problem as its productive condition, prolonging it into an aching tension that seems to suspend its terms within a vibrating and strange moment. This moment both beautiful and difficult.

This moment or suspended 'gap' between the content of the words and that of the images seems to me to have a performative relation to the theme of the film: human relations to the animal, both the one outside and inside of us. As the words traced the limits of this impossible relation, so this impossiblity manifested in the irreconcilable splitting of the image from the word. But this 'splitting' was itself a 'joining', a performative affect of inadequacy that staged itself on the very limits of description. In fact, I'm not at all sure it was 'described', inasmuch as it tried to position itself beyond the limits of language and description, at that very point where the human - and perhaps language too - takes leave of itself. But what I loved about this gesture was that it absolutely refused any destructive movements, any sublime collapse, but instead explored this gap as the formal condition of its own existence, as the ontological condition of its dark poetics. On the level of its content this genetic tension also ordered its opposed terms: philosophy about animals (often horses) and images of horses. Without leaving this deceptively simple structure then, the film motivated its terms as vectors whose trajectories took them away from each other, deconstructing their assumed harmony to reveal a gap that was both their genetic condition, and their impossible relation. Within this carefully calibrated choreography the animal arose in all its reality - the real, the impossible real, that dark chasm between language and life. From within this chasm language and animality confront each other, the first talking insessantly while the other finds a form in the opaque and liquid gaze of those statuesque beasts. An unreadable void - dark light. We illuminate it only by destroying it, a true example of what must always be false, the veiling/unveiling of Being. To say this of a film seems odd, pretentious even, but I don't think it in any way exceeds the scope or the ambition of the film, which is quite explicit about its philosophical point. Explicit but graceful I would say, offering a performance and not a lecture. Learning by doing.

The film nevertheless refuses all gestures towards presence and immediacy in favour of a very refined and meditative slippage, a kind of generous refusal, if I can put it like that. But still, for me, the animal emerged in its puzzling grandeur in the images of the magnificent sweating, steaming horse, and then later and even more mysteriously, as the two horses' backs rise out of the smoking landscape, like fish, or hills, or fearfully partial-objects. At these moments something of the 'horse' in its animality pushed itself forward, and a shiver went down my spine that was both terrifying and delicious. At these moments the images seemed to drown out the words so I cannot remember what was actually said. At these moments the film seemed to be moving towords its own outside, the outside of an inside/outside, perhaps??

This is already a sensation far more intense than most humans deserve. Thank you Maria for your dark light.

Stephen Zepke teaches Philosophy at the University of Vienna, Austria. He is the author of Art as Abstract Machine: Ontology and Aesthetics in Deleuze and Guattari (Routledge, 2005). Watch Dark Light on CIRCUIT here.