The inherently ephemeral nature of the moving image makes it particularly suited to narratives of travel. This notion of journeying is central to Excess Baggage, a show of five video works by international artists recently installed at Dunedin’s Blue Oyster Gallery.

The itinerant life of Wellington-based curator Claudia Arozqueta informed the exhibition, which presented work by five women drawn from countries that Arozqueta has lived in; Mexico, Russia, and New Zealand (with Dutch based Irina Birger originally from Russia). The international scope of this selection emphasised a thematic concern with travel and the relationship of identity to place, with each artist invoking the liminal space of a forever in-between, the endless becoming that never becomes.

Irina Birger’s Irina Birger Thinks Drawing is Important (2010) is the most complete journey of this show. Its arcs of departure and return describe that peculiar brand of becoming that is leaving home to go in search of home.

The film opens with an accelerating montage of overlapping photographs, the background of one becoming the background of the next, all centred on Birger’s face; expression and hairstyle changing with time and place. Black title cards break the story into sections, each marking years spent in particular places. Accompanying the stream of photographs of Birger, the people in her life, and images of her work, the artist then begins reciting a narrative of her life. 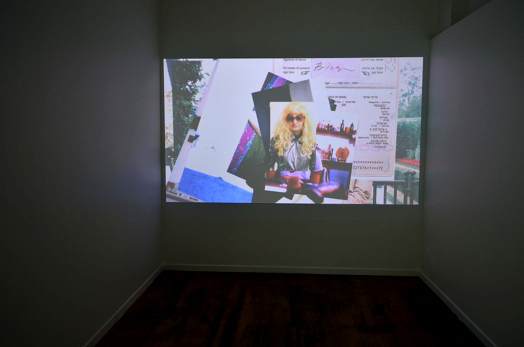 As cartography serves for the description of place, the photo album (or stack of loose pictures or archive of home movies or that folder full of selfies on your phone) is the map of a life. Birger’s procession of images chart an elliptical trajectory, from birth through nascent artistic sensibilities and an emergent career as multimedia artist and curator,to a return to the immediacies found in the fundamental practice of drawing. Projected in the gallery’s second space, Birger’s journey through space and life reminds us of the very personal aspect of any art making practice, whilst the piece’s straightforward narrative acts as an anchor for other works playing on screens in the main room of the gallery.

The airport departure lounge that is the location of Elena Astashova’s Body Building (2010) could easily be one that Irina Birger has passed through while chasing her love affair with art. However, Astashova’s world of transience is a dispassionate and absurd one. A Russian male athlete performs a short series of repetitive exercises—skipping rope, lifting various weights—in an airport waiting area in front of a small audience of travellers. Shirtless, with forehead and hair slick with sweat, the man gazes blankly ahead as he goes through his routine. His audience of ex-Soviet seasonal workers look at him bemusedly, if at all. An ambient soundtrack of airport hubbub punctuated by the occasional clink of hoisted weights underscores the bizarre banality of Astashova’s spectacle. The apparent disinterest of the spectators plays against the subtle menace of the body builder’s physical bulk, his out-of-place Alpha-male presence drawing out cultural tensions around post-Soviet migrant labour.

Facing Astashova’s body builder across the gallery space is Elena Kovylina’s own display of physical endurance Caryatid (2012). Kovylina has become recognised as one of the most prominent post-Soviet female artists, building a socially incisive practice across a swath of disciplines. Here she addresses the constructed notion of ‘home’ — the origin of all journeys and end-point of some. Caryatid documents a 2012 performance where the artist stands for almost five minutes with arms aloft, holding a pink scale-model Ibza house. Immaculately coiffured, she stands defiant and proud with her burden; emblematic of the sculpted column that lends her performance its name. Although formally and femininely dressed, the piece works against the woman-as-decoration caryatid, emphasising instead the caryatid as structure and women as structurally central in maintaining the traditional Russian household as a home. This durational work has Kovylina steadfast and still, and yet she is possessed of life and invests the home, as a central origin point, with a dynamic potential.

New Zealander Claire Harris’s relationship to the idea of home, appears to be a slightly more problematic one. Her work Born in Gore (2011) presents us with two minutes and fifteen-seconds of bagpipes and screaming. Harris, long white nightdress billowing in the wind, stands in a green hilly landscape with Scottish piper, Euan Robertson. As Robertson begins to play Harris fills with tension, building towards a bout of anguished yet apparently cathartic screaming. In addressing the horror of home, Born in Gore is a humorous negotiation of the occasionally complex emotional process of coming to terms with ones origins that is only occasioned with the critical distance of having left. The piece also sardonically comments on the false nostalgia of the Scottish links of Otago and Southland and the inherent rootlessness of the colonial imagination.

Finally, in Sin Huella [Without a Trace] (2013), Gina Arzipe is seen stalking across sand dunes of the Chihuahua desert in northern Mexico. The artist tows a car tyre behind her, erasing her footprints in the sand as she goes, simultaneously tracing and destroying a path. The specific location in Chihuahua evokes the journey of Latin American migrants walking through the desert to cross the border into the United States. This is a migration heavily steeped in notions of disappearance; many travellers leaving homes, families and histories that they will never see again, some only to be abandoned in the desert by the ‘mules’ that are paid to smuggle them to a new life. Arzipe’s relentless and trackless march across the desert describes a geopolitically specific map of existential impermanence.

In this tightly focused and intelligently curated selection of work, Arozqueta finds a unity in the diverse catalogue of these five artists. Excess Baggage, a term used to describe burdensome emotional memory, provides a point of negotiation between self and space, and a definition of identity through transience. However difficult, whatever you carry with you in this world is you; where images are transitory, the journey is the destination, and the only trace remains in the mind.