In a Dream of 200,000,000 Horses extends concerns earlier explored in a series of film installations by Nathan Pohio. Exhibited in a various group exhibitions over the past few years these installations were often projected into corners, allowing a series of digitally manipulated images to scroll past the viewer, bringing with it a cursory presence, a flickering, jolting, kinetic expression perfectly reinforced by their horse imagery. Scanned from an assortment of generic horse calendars, these stock images were digitally processed, spliced together, collapsing the horse’s generic profile, into a fractured, co-joined, monstrous, multiplying entity. This is similarly the case with the three works that comprise In a Dream of 200,000,000 Horses (2016) in which Pohio has extracted pictorial fragments from the spooling image flow of the film work, The Feral Horses of Natascha von Braun (2015). Rendered inert, as large linear prints, these filmic screen grabs trouble the reproduction strategies through which Pohio has sought to manipulate the source material’s kitsch banality. Indeed two of the works are even printed on vinyl skeins, retooling the advertisement tropes of the billboard, openly toying with the banality of this multiple reproduction of what was already a generic image.

This isn’t the first time Pohio has manipulated this kind of content. In 2006 he made a video from a lenticular print of similar generic horse imagery. This earlier piece carried a thread of melancholy,, haunted as it was by Pohio’s re-animation of what was an antiquated technology, something beguiling alluded to in the thrift store hues of the video work and in the simplicity of the title; Asleightofhandmanouvreringofastillimageintosomethingmoving (2006). Jamming the text like that not only mimicked the stilted mobility the video work so celebrated, but also pointed to the basic improvisational gesture deployed in animating this generic imagery, imagery we should point out was left dormant in the illusionary thrills of a lenticular print quietly gathering dust.

Pohio’s engagement with the lenticular print echoes earlier comments by Akira Lippit who suggests that the technological encoding of animals in representation reinforces a ‘perpetual vanishing’ of the animal subject.(1) This is reiterated in Pohio’s decision to animate the melancholic object, the dusty lenticular print, perfectly ventriloquizing what Lippit calls the ‘spectral economy’ through which an animal’s displacement in technology perpetuates the disenchantment of a contemporary experience bereft of authentic nature experiences. These characteristics though are a long way from the vibrant, mostly pop-tableaux of Pohio’s current work, which take on a surreal quality in the jarringly collaged splicing of horses’ heads and legs. Such vibrancy defiantly undercuts the melancholy of Lippit’s spectral economy, making the technological encoding of the animal less a surrogate relation than it is a prompt, a secondary mobilisation of the generic register in which this banal animal representation has fallen. This is an aspect further complicated by the titling of the earlier film work, In a Dream of Natascha von Braun (2015).(2) One of the crucial character’s from Jean Luc Godard’s Alphaville (1965), von Braun is herself a composite being, a ‘replicant’ (to use the term from Ridley Scott’s Blade Runner (1982) which mines similar terrain). Here then, it is not simply a case of collage merely recoding the generic image but of an algorithmic processing of images, a sorting and ordering. We see this in the joltingly familiar and yet constantly mutating imagery Pohio’s collage technique turns out, creating a string of images that is compulsively searching for new analytics, new combinations. Which is to say that there is a mechanical process at play, an assured methodology that has entered run-time.

Given this recourse to artificial technology, it’s no wonder that Pohio would so deliberately stretch the representational framework, re-introducing futurist agendas into the commercial nexus of stock images and billboard production values. Take for instance the large vinyl work, In a Dream of 200,000,000 Horses (2016) in which the disjunction of picture planes reinforces the replicating legs. This creates a vector of motion, allowing the faux-billboard to conjure the idea of a horse running across a shoreline, something reinforced by the splicing and replication of the water splashing up onto the horse’s legs. These effects conjure a peripheral vision, even though we are standing in front of it. In the video work that this is extracted from, these images stream past the viewer, they literally take on motion. The images remain static, unless we bear witness to their mobility. That is, like our shifting perspective in front of a lenticular print, it is our position as a reader that enables these alliterations to create motion. Which is to say, conversely, it is an inescapable feature of the fractured plane to imply movement, to allow it to mingle, to be made multiple, to escape our static terms of reference in favour of its endless reproduction as something else entirely. 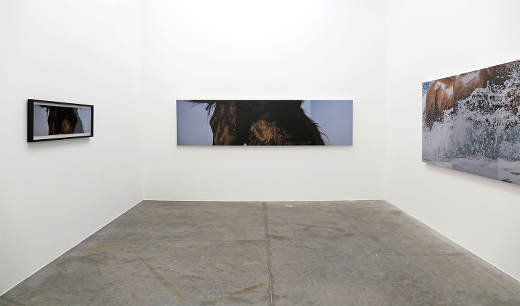 Installation Shot: In a Dream of 200,000,000 Horses. Courtesy of Jonathan Smart Gallery

The multiplying imagery of Pohio’s representational strategies, particularly in his use of overlapping and accumulating alliteration to create a compulsive linear mobility, may upturn the representational limit of traditional moving image works but that isn’t the only agenda at play in this series of works. Indeed we might heed the multiplication of imagery Pohio is so assuredly stitching together, stretching images that are already endlessly replicated to the point of banality. Given this saturated context, Pohio’s seizure of this terrain is a deliberate attempt to push this dissemination of the image into new formats, making of them a performative, situational matrix which usefully extends across mediums. It is in this way that Pohio introduces an entirely new subject material, mimicking not only the endless reproduction of these generic, stereotyped stock images in his dislocation and extraction of them from still images, to moving images, to film stills that are then replicated on faux-billboards, but probing at the indexical relation of these images to actual horses. Horses after all do get displaced, quite literally when we talk of horse power, taking up their motive, hauling power and placing it as an expression of automotive torque. But to go from this dislocation in technology to the types of generic imagery so keenly displayed in the calendars is to recognise how much the image is no longer just a referent, but a conditional subject. Here then we find Pohio’s strategy aligning with other practitioners, who as David Joeslit points out no longer concern themselves with discrete images but rather the multiplying and performative context in which ‘populations of images’ come to be understood.(3) Perhaps the most pertinent case to hand is Richard Prince’s re-photographing of the Marlborough ads, given that there is not just an overlap of the horses, but the indexical relation those images carry. Indeed, Prince’s re-photographing of these ads doesn’t work without their indexical relation to the foundational myths of North American settler identity, particularly given how contrived Prince’s isolation of these images comes to be seen in light of the sullied, degenerative reality of the actual Marlborough man and a postcolonial gaze that so shatters the settler myth of progress and western frontiers.

It is obvious that Pohio has settled upon what Joeslit calls a format, ‘a dynamic mechanism for aggregating content’; a mechanism that also allows for ‘its retrieval in intelligible patterns’.(4) As I mentioned before this relation to the algorithmic methodology is implied by the works’ allusion to the replicant Natascha von Braun. Much is said these days of everyday objects, instilling in us a reverence for a pragmatic realism that works with what is at hand, and yet too often we are willing to overlook the registers that stubbornly resist this irreduction. Whether encoded in the kitsch or the sublime, such registers also imply an interchangeable condition, a generic mutation that bears witness to the indexical relation that enjoins us to culture. This is similarly the case with Pohio’s exhibition, in which the stock images of horses have been isolated as a population. A small, resilient group of images, thread-worn and entirely interchangeable, have been regrouped, made unto themselves, tracked, traded, recoded precisely as what they are, images that are endlessly reproducible, endlessly multiple, but still nonetheless shaped by culture. Which is to say that Pohio exposes a structure through which we trade in the mythologies that shape our lives, exposing our mediated relation to the real, whatever that is, however contaminated it might be.

(1) Akira Mizuta Lippit, Electric Animal, Toward a Rhetoric of Wildlife (Minneapolis, London: University of Minnesota Press, 2000).
(2) This title is carried over into current show, with one of the billboard type works also being called, In a Dream of Natasha Von Braun, 2016
(3) David Joselit After Art, (Princeton: Princeton University Press, 2012);34
(4) Joselit, 55–56.

Nathan Pohio, Let it be to a Lofty Mountain, Christchurch Ar...
END_OF_DOCUMENT_TOKEN_TO_BE_REPLACED