Back in the early 1990s, friend, artist and then Elam School of Fine Arts intermedia student Tessa Laird enlisted my participation in making a video. Quite simply it involved one afternoon purchasing chicken dinners from the Kentucky Fried Chicken in Ponsonby Road, Auckland and then returning to my flat around the corner to get stoned and eat. We chewed the fat, as it were, for an hour or more, before the camera as witness.

As a young participant then, I’m in no position now to assess the meaning, strength or significance of this gesture. Perish the thought the VHS tape might be out there somewhere. There should be a locked vault somewhere for art school video works such as this - to which only Phil Dadson holds the key.

What I can say though is that, firstly, Tessa was a vegetarian, and this for her was a big deal. More personally challenging than any of the blood cutting, leaching and piercing works by men of the 1970s. Even for me (a North Shore quarter acre KFC quarter pack kind of guy) I recall finding the required closer, inspection of the Colonel’s crispy-coated chicken rather disturbing. It pays not to look to slowly at fast food.

Clearly the marijuana assisted, but I was also fascinated by how the presence of a camera changed the pace and nature of our private space as friends. Back then video cameras didn’t have the ubiquity they do now – the camera’s popularity in recording performance art was in a period of wane.

Memories of this event reemerged from whence they have been safely hidden in my memory banks whilst watching Sarah Jane Parton’s new video work Potato and Gravy in Remade at the Film Archive, Wellington.

For this exhibition, curators Jennifer Gillam and Eugene Hansen asked various artists to remake as they saw fit a title held in the archive. Thankfully Tessa’s video is not recorded as Sarah Jane’s inspiration, but it may as well have been. I’ve never seen an artist get this intimate exploring the twinned revulsion and fascination of KFC chicken anytime since.

Accompanied by the sort of cheesy easy listening synth that might be the soundtrack to a terrible yet surreal dining experience, Parton snuggles down on the floor in the corner of a room with many tubs and packs of chicken and potato and gravy and a desk lamp. Using her material like it were clay she carefully, lovingly piles chicken into a sculpted mound, employing potato and gravy as glue (dabbing at it on a plastic tub top as if this were her painter’s palette).

Parton is artist as performer in her work. She creates beautifully nuanced, tender solo portraits that cleverly play off and askew popular role-modelling of women in film. She makes intimate, shy, private experiences out of public ones (again Tessa’s work comes back to me). Here in this video she is strong but vulnerable in flesh-coloured tights and a putrid canary yellow sweatshirt. It as if she has stepped out of the back line of a dodgy theatrical presentation where there’s been a half-hearted attempt to dress a chorus line as chickens.

We’re denied our voyeurism – Parton as subject is far too under the reverie of Colonel Sanders and consumed with her craft to bother looking up at us the viewer. It is comic, but denied any eyecontact we’re placed in a more troubling position.

Associations like Richard Dreyfuss’s mashed potato mountain in Close Encounters of the Third Kind and the butter sculpture videowork of Richard Maloy come to mind, but Parton’s work has a far more maternal, even feminine feel. We are, as with past Parton work, in the teenage dreamworld of a young woman. Absent mindedly she strokes, fondles and pets the KFC, drifting off to sleep, curled up next to it as if it might be baby, boyfriend or best friend.

It’s all very smartly directed and paced, full of lovely gentle moments. At one point, like executing some old Buston Keaton gag, Parton sends the pile of empty chicken pots toppling, as her legs extend out as she tosses and turns in her light sleep.

Does she with her longing, lament the poor chickens that have been slaughtered? Perhaps, but clearly at the works heart is our affection for these beautifully commercially coated commercial products, part and parcel of which are the marketing and containers that carry them. The grossness and tenderness of it all expresses something of the complication of our obsessive relationship to what we eat.

Parton is responding, the wall text tells us, to Archive-held footage of the remote atoll where her grandmother was born in the Cook Islands, and an episode of Heartland where a group of Aitutakians are seen returning to their home village, with one woman taking a large box of KFC with her. You don’t need to know that to enjoy this work, and that’s one reason this is an exhibition highlight. The rest of Remade is a decidedly mixed bag.

The curators themselves describe the process as open-ended and the results idiosyncratic, - unsure what they would get from the artists’ or what they would choose from the archive’s vast vaults. Such an open mandate doesn’t strike me as a particularly failsafe way to ensure a strong show. What we get are some radically different takes on what ‘remaking’ constitutes, but they’re all a little haphazard to make the theme, let alone most of the works, that interesting. More focus – like these artist all remaking one single item (akin to a music remix project) – might have achieved this. Even better perhaps more development time to ensure really strong works. It seems no accident that Parton’s work is both successful and clearly part of a well-developed series of works that extends back in its tone and style many years.

Interspersed between all the works is a remake of a 1960s Brylcreem ad by Faamanu Vaofusi. The work plays off male and racial steretypes – our hero seen looking serious in various different jobs. The punctum is that the voiceover has been overdubbed into Samoan. It’s supposed to make reference to the pressures of assimilation and the plight of the migrant worker. The man in the video looks generic and has slicked down any traces of a fro. And yet I get none of this because I couldn’t hear the audio properly. I had to learn that it was Samoan from the wall text. For all the work’s very promising intentions, the editing felt rushed and the work generally felt like it fell short of its intended mark. Still from Brylcreem makes the most of a man, Faamanu Vaofusi, 2012

Same goes for Gemma Symes remake of old iconic Shortland Street scenes from her and her friends’ memory (‘Dom listening to Pink Frost about to kill girl in bathtub – as remembered by Claire and Gemma’, Lulu and Minnie dancing to The Chicks - as remembered by Claire and Gemma’). The idea of remaking television from collective memory is really interesting, but with only three small snippets gathered it doesn’t transcend cuteness. The project deserrves to be expanded or exhibited on its own alone. Indeed, this is something the exhibition display generally is hampered by – all six works displayed in one long loop rather than able to be given their own individual space.

Chris chilling out to The Chills, Gemma Syme, 2012

The other three works here all experiment in interesting ways with the media but again don’t feel quite resolved – initial experiments that could be furthered.

Andy Thomson’s Film Theory Standard Model is perhaps the most promising for me. Philosophical text about the perception of time and space scrolls down the screen in the manner of the Star Wars opening introduction, but at such a pace and compaction as to become increasingly unreadable. 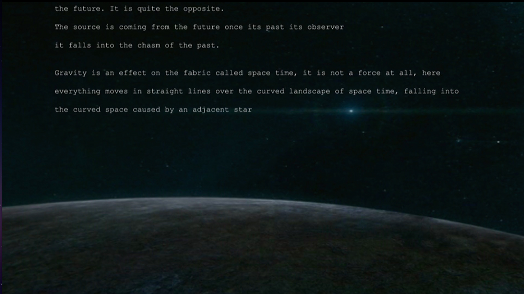 While the work plays to the absurdity of art being judged first and foremost through the gause of theory, more essentially the text becomes like a fabric or net of human thought cast over infinite space as the camera pans off to reveal scenes of the twinkling universe. In this way Thomson’s work is an interesting experiment in representing how we percieve our existence. The work references Views of Murchison After The Earthquake Filmed by a Wellington Visitor, an amateur 1929 black and white film. Yet this connection is less clear to me. I was left wondering if the exhibition would have been stronger for having twinned each work with the original source material which inspired it, however slender the visual connection between them.