The Aachen Faxes (2012) is a simple striking video of white text on a black background. The text is taken from a series of faxes Julian Dashper sent to his partner Marie Shannon during his Aachen residency in 1995. The soundtrack is fittingly maudlin, a lone cello played by Dashper’s brother. The video is pitch perfect; the text exquisitely weighted across the screen as though set by a typographer onto a page.

On the gallery wall is a photograph – also black and white – taken from a window in Aachen, a small city in Germany. The view is of rooftops, a slice of sky. The atmosphere of the photograph is discreet, like the music from the cello. The trees in the photograph are small, black fingered, sketchy. On the floor is another photograph leaning against a table at Hamish McKay, its corners fitted with four white protectors, as though still in the process of relocation. The image in the centre is of a wrapped photograph: the frame within the frame. I’m reminded of Magritte’s anonymous couple kissing beneath white sheets.

The Aachen Faxes is a work about lovers. The flanking photographs accentuate the centrality of the video and offer different windows through which to view Aachen. I greet the image of the wrapped photograph as an echo; a monument to a life that has now slid out of view. Julian Dashper is an important artist in the New Zealand canon, but the success of this work doesn’t hinge on knowing ‘who’ he is. The voice that speaks through the faxes is lonely, funny, kind, interesting. ‘I’m still right off German meat.’ This sentence flies solo across the screen. Shannon’s comic timing is spot on. I didn’t laugh out loud, but I smiled several times watching The Aachen Faxes. It’s a tender work. How could it not be? ‘Dear Marie. I love you and miss you greatly.’ The voice in the video becomes that of everyman, and Marie, whom each fax is addressed to, everywoman. 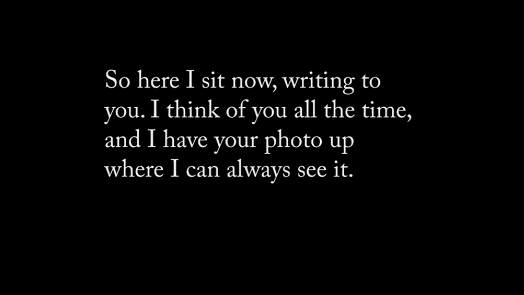 In the black and white video, the grief stricken sounds of the cello are held in check. I sense sadness, but also an artist aware of the sentimentality of sadness. The video is not mawkish; Shannon knows how to hold back.

I was raised on confessional art. I’m a fan of Anne Sexton. Growing up I watched a lot of Oprah with my Mum. The autobiographical is often associated with woman writers. As Jeanette Winterson once so riley observed: ‘I have noticed that when women writers put themselves into their fiction, it’s called autobiography. When men do it, such as Paul Auster or Milan Kundera it’s called meta -fiction.’ I wager a bet that certain viewers will be non-plussed about The Aachen Faxes this reason. Shannon’s work arrives smuggled under the guise of autobiography and it is easy to dismiss it as such, not considering the creative hierarchy that underpins this judgment. Although the words in the video are not Marie’s own, she is addressed, summoned, loved. 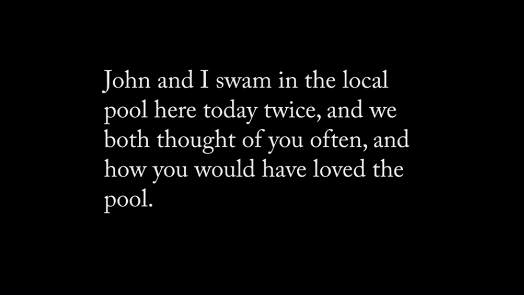 Of course The Aachen Faxes is also about grief. How we pack up and attend to our dead. How we take care of them. I’m reminded of Raymond Carver’s early death from cancer. Carver wrote about dying from his own perspective and his poems are always worth re-reading. After he died his partner, the poet Tess Gallagher, was left with her own grief, also expressed through poems. A line from Gallagher’s Wakehas always stayed with me: ‘We were dead a little while together then, serene and afloat on the strange broad canopy of the abandoned world.’ Reading The Aachen Faxes I felt serene and afloat on the strange broad canopy of the abandoned world. At times the voice of the video seems to be describing the condition of death, as though it is another country. ‘My days are very quiet and I keep to myself.’ This is knowledge that the art literate audience brings to the work. We’re aware of Dashper’s legacy and the perseveration and cultivation of his estate.

I was struck by one line in particular: ‘I am by myself nearly all the time, which is fine, but it is a bit like being a caretaker of something, as I wander from room to room with everyone just smiling at me.’ But the caretaker now and perhaps for some time has been Marie Shannon. This is the sticking point, the crux from which her work derives its power.

The fact that Shannon has kept the word faxes in the title is significant; it helps to weight the work in the past. The video takes me sympathetically into the mind of the voice behind the faxes, so that I too am roaming the corridors of Aachen like a caretaker, staring sympathetically out of the window at that black and white view.

‘Aachen is like Hamilton. (Except older.)’ This comparison told me more about Julian’s experience of Aachen, than the adjacent photograph ever could. I know Hamilton. I have many memories, mostly framed through the window of a bus, a traveler just passing through. Hamilton is a place with a river, a sad place. Not a destination. A dead end.

Shannon appeals to our emotions, she puts the viewer in her place. The Aachen Faxes is not doing all of its business in the circumference of the mind. That’s why I like it so much. I felt a bit tearful watching the video. I don’t know Dashper or Shannon. Of course I know of. But it’s more human than that. I related to Dashper’s loneliness, his penchant for cats. ‘Switzerland was good for cats, except they are the sort that let you pat them for a while then bite you quite hard.’

The Aachen Faxes bites quite hard too. I thought about Marie Shannon and her assumed role as caretaker of Dashper’s estate. I thought about her charming photograph of a parmesan cheese house. I thought about the fact that I don’t know her work well enough. Shannon has often worked willfully with the trappings of domesticity: a wobbly watercolour of two pillows at the head of a double bed. Love letters. Memories of dreams. I don’t have the full picture on her. I’m still nibbling at the parmesan house.

I saw The Aachen Faxes just before the show came down. Hamish turned the video on for me. I caught it just in the nick of time. I’m glad I did. The Aachen Faxes clarified what matters to me when I look at art. The care taken.