This is Old Zeeland: CIRCUIT in Europe 2018 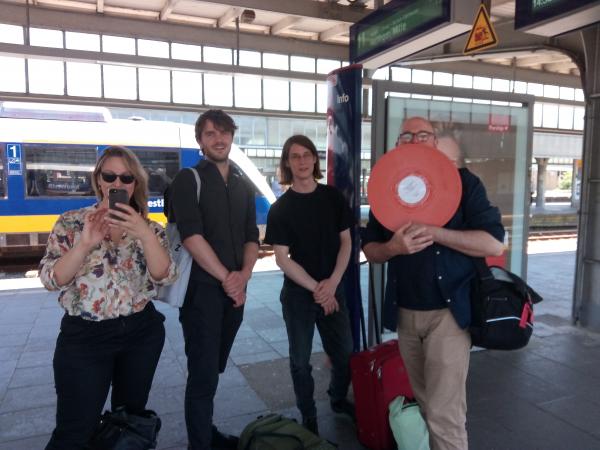 In the first week of May CIRCUIT presented three screenings of local artist moving works across venues in London, Germany and Belgium. Each host institution represented diverse models for presenting artists cinema, drawing on the structures of contemporary art, the international film festival and the co-op style model of the cinematic avant-garde. What does each model offer the artists in 2018? And how might this network of contacts suggest a longer-term engagement with New Zealand art in the international sphere?

The tour began on a Thursday night at London’s Whitechapel Gallery with our 2017 programme of Artist Cinema Commissions, Thick Cinema. Curated by Mercedes Vicente, Thick Cinema presents five works by Fiona Amundsen, Joyce Campbell, John Di Stefano, Sam Hamilton and Kim Pieters, each of whom were asked to explore the sensorial whilst retaining their sense of criticality.

While this programme is well known in New Zealand, this was it’s first international outing. One of the great things about showing a programme repeatedly, and in a change of context, is a gradual realisation of what the works actually do, as well as what they seek to effect.

Sam Hamilton’s FOR THIRTY YEARS NANCY WOULD SIT AND STARE AT THE SUNSET (2017) features four teenagers sitting in a line and simply gazing at the fading day. Most obviously, they are teenagers without phones, tasked with simply being ‘present’ in a staged encounter with nature. Yet more and more, Hamilton’s single roll of 16mm film feels like a cinematic McGuffin(1) dreamt up by John Cage; forget the image of teenagers, and listen to the rustling of summer leaves in the gentle breeze, the scuff of passing footsteps, far-off conversation, a train hooting it’s horn, a distant siren; this is a sonic portrait of urban USA in 2017. Watching Joyce Campbell's Company Stream (2017) produces a similar effect. A camera follows an eel underwater, while on the soundtrack we hear Campbell and her husband play an improvisation for stringed instrument and wheezing organ. The eel is abstract and ungraspable, frustrating maybe; but if we flip the implied hierarchy of image and sound which we formally term 'cinema', the work becomes less about seeking an image of a slippery fish than following a river of sound, supported by lithe, popping flashes of skin, fin and tail.

As with previous screenings in New Zealand, Fiona Amundsen’s A Body That Lives comes under scrutiny for the seeming interrogation of the subject, a 92 year old Japanese former POW, who is asked to recount the details of his escape from a WW2 Australian prison camp. In the absence of the artist, Mercedes and myself present other potential readings, based on the subjects long standing relationship with the interviewer, his own agency in deciding to take part, and Erika Balsom’s observation that perhaps our discomfort lies not with the questioning of the subject but our visual proximity to his obviously decaying physicality, and, by implication, our own inevitable mortality.

Sam Hamilton has travelled from Portland and joins myself and George Clark (our 2016 Curator-at-large) on stage for the Q&A. An audience member comments; ‘I expected beautiful landscapes…but the films are so claustrophobic’. Sam explains that the image of NZ as clean, green, etc is a myth. No-one seems to notice either that three of the films were shot in Japan, USA and Italy. Mercedes leads the conversation towards more general questions of artist production in NZ. George is cast in the role of translator to the London audience and explains New Zealand artist moving image production as rooted in conceptual and interdisciplinary practice. He describes his own interest in taking on the job as stemming from a curiosity as to what New Zealand artists might propose as ‘cinema’. 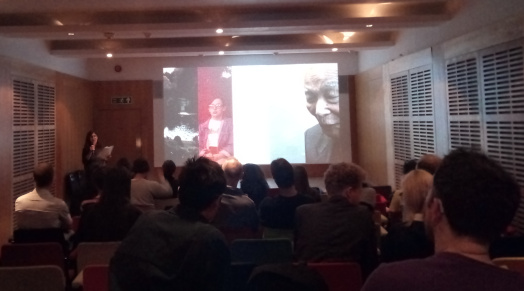 The next morning is a 7am flight from London City Airport to Dusseldorf, and from there, a shuttle to the North Rhine-Westphalia region. For the past four years CIRCUIT has been an invited guest at the International Short Film Festival Oberhausen, which each year presents an international competition of recent works alongside historical programming, performances and discussion. Oberhausen is famously informed by a 1962 manifesto written by a group of German film-makers which declared “Together we’re willing to take any risk. Conventional film is dead. We believe in the new film.” To that end, CIRCUIT takes it’s place in the Market Section, where a select number of Distributors from Europe and North America are invited each year to showcase a programme of recent works.

The festival directive to Distributors like CIRCUIT is to avoid curation per se; but I introduce the six works in CIRCUIT’s programme as broadly pointing towards generational shifts; Aliyah Winter’s Eli Jenkins Prayer (2016) speaking to queer histories and temporal drag; Gavin Hipkins’ City of Tomorrow (2017) and Brit Bunkley’s Ghost Shelters (2017) portraying ruined modernist utopias; Phil Dadson’s Anatomia Sonora (2016) signalling the rising tides of climate change. Over descending synthesizer lines by Kody Neilson and Bic Runga, Nova Paul’s The Week Before Spring captures the slow turn of the seasons. The key image though is a brief shot of the handle of the glass sliding door through which Paul shoots the outside world. Why is she inside? Why can’t she leave? Will Spring truly come? 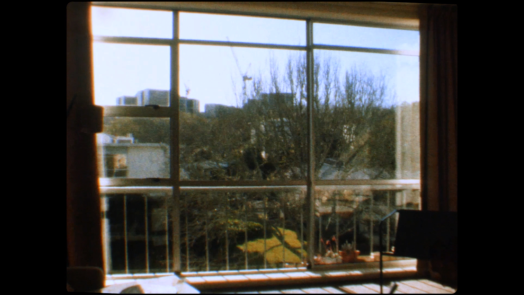 Still from The Week Before Spring (2017) Nova Paul

In Oberhausen this year we’re joined at the screening by a clutch of New Zealanders. Juliet Carpenter has travelled from Frankfurt where she is studying at the Städelschule. Nova Paul has journeyed from Auckland, but lost her voice, but bravely scrapes through the Q&A. Peter Wareing has shown twice in previous Market Screenings, and is here again from his base in London, this time as a spectator.

What does it mean to have shown at Oberhausen these past four years? When I first visited the festival in 2010 there was a sense of… New Zealand? CIRCUIT? Yet now there is a growing awareness of this area of practice in NZ, and many of our networks have filtered through the festival. Two of our curators at large, George Clark and Erika Balsom, have been jurors or seminar leaders. Gavin Hipkins has twice now been accepted into competition, appearing to present his film to a packed house in the Lichtburg Cinema, and we have shown over 20 works by 20 artists in our Market screenings. There are now also familiar faces and supporters; Erwin Carels, part of the team that selected Hipkins’ City of Tomorrow in the Rotterdam Film Festival this past January; Adam Pugh from Tyneside Cinema who will show Joanna Paul this upcoming August in Newcastle, Benjamin Cook and the team from LUX who have supported CIRCUIT in so many projects from the London Film Festival to the critical nexus that has brought us into contact with so many collaborators.

Elsewhere, there are meetings with colleagues from other nations on the periphery, and a shared sense of a mission to introduce forgotten histories to the world; Vassily Bourikas introduces me to film-maker Davorin Marc who between the ages of 12 and 22 completed dozens of experimental films in the former Yugoslavia before ceasing production. When I ask the obvious question of ‘why stop?” the now 50-something film-maker simply shrugs and says “Various reasons”. Later Anna-Karin Larsson of Swedish Distributor Film Forum gives me a compilation of work by legendary film-maker Gunvor Nelson, happy to see the work travel to the other side of the world. All of these encounters go into the mental sea of possibilities for further programming in New Zealand.

One of the many familiar faces from Oberhausen is Godart Bakkers, a Dutch curator based in Ghent, Belgium where he programs an experimental cinema called OFFoff. This year Godart has invited CIRCUIT to make a trip post-Oberhausen to Ghent, to show the Joanna Paul survey programme Through a Different Lens. Since Nova Paul is here also, and made her 2016 film Still Light in response to Joanna Paul's poems, we add take the opportunity to add Nova to the bill, and together we all leave Oberhausen for Ghent.

The OFFoff cinema is located in a former hospital within the grounds of a 13th century ‘beguinage’. Beguines were single women who lived together as a Catholic community. Many women were widows, often because of war. The last Ghent Beguine died in 2008 shortly before her 100th birthday. The beguinage is fortified by brick walls, though a door offers access to the river where the Beguines washed their laundry. It seems a fitting location for Joanna Paul films like Sisterhood (1975), Task (1982) and Napkins (1975); films that show women's lives. OFFoff defines itself as "on the cutting edge between 'fine art' and cinema." In formal terms it is closer to an artist-run or co-operative model than the vastly different institutions of Whitechapel and Oberhausen. There are 40-odd seats and a bar, a variety of film facilities and a digital projector. Godart introduces the evening, Matthias runs the projector, an intern takes the tickets, the barman pours the drinks. It is a good, simple model that supports the work and a conversation.

The screening is well attended and Godart notes that amongst the regulars there are some new faces. My only wish is that I’d made the projected image smaller, to bring more intimacy to the screening of the works and perhaps also to consolidate some of Paul’s images, which, shot 45 years ago and scanned from a fingernail sized 8mm frame seem a little soft. We live and learn. Following Joanna Paul's films we show Nova Paul’s Still Light (2016), which after an hour of mostly black and white silence is a revelation, not only for its' vibrant colour but again, sound; a gentle tumbling vocal by Bic Runga, accompanied by sparse Fender Rhodes keyboard. This is a strategy, Nova explains, to bring in the female gaze, and it warms the room.

One of the hallmarks of the trip has been the generosity of the European hosts. Prior to the evening screening at OFFoff, intern Lien Delabie offers to drive Godart, myself and Nova two hours north of Ghent to Zeeland. Why? My somewhat spurious question as to why a 17th century Dutch cartographer would name a small South Pacific country after a small province on the other side of the world. And so, in the province of Zeeland our bemused party walks through the town of Middelburg where the bell tower peels out Billy Joel’s ‘You’re always a woman to me’. Was it something about sharing a dry sense of humour? We visit the beach, and yes we have those in New Zealand too. Over lunch Godart shows us an older map of Zeeland, which pre-land reclamation resembled a series of small islands. Did the anonymous cartographer imagine 'New Zeeland' as a similar series of discrete land masses? Was that it?

In the end, the naming of Aotearoa New Zealand in the image of a small Dutch seaside port is a European historical fantasy. But in 2018 the connection between Aotearoa New Zealand and Europe seems to be built on solid platforms of engagement. Artists come here to hone their craft, works and ideas are exchanged, and in the company of friends and colleagues the world grows subtly closer. 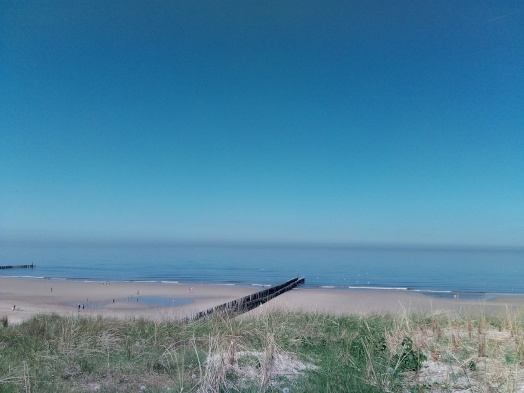