Hit Me with Your Best Shot - installation by Janet Lilo, responses by Louisa Afoa and Lana Lopesi Guest bloggers Louisa Afoa and Lana Lopesi from #500 words - young criticality on art and culture respond to Janet Lilo's recent show at The Physics Room, Hit me with your best shot.

#500 words response #1: - Louisa Afoa
I’ve always seen Janet Lilo’s practice as being rooted in the idea of community. Recently installed at The Physics Room in Christchurch, Hit Me with Your Best Shot is another example of the artist placing the outside world in a gallery context, creating a platform for discussion about place and people.

Although two years have passed since the Christchurch earthquakes, the remains and traces of the events can still be seen in the city landscape. As an outsider documenting a community that isn’t their own, the challenges Lilo faced in making Hit Me with Your Best Shot become amplified, with the work running the risk of being perceived as insincere and exploitative. The key to the success of the installation lies in Lilo's process of making the work.

Searching for connections between herself and the city, Lilo embarked on a journey to Avondale, a suburb sharing the same name as her home in Auckland, but with a different pronunciation. Along her journey Lilo began to gather found objects and encounters which would become integral aspects of the work; a box of discarded cassette tapes and snapshots of architecture that caught her eye along the way. Meeting members of the local community she took their photograph on a Polaroid camera, gifting the portrait back as a keepsake.

Entering the installation you immediately come across a slack rope that runs the entire length of the gallery dividing the space in half, acting as both sculpture and protective barrier. The space on the right hand side contains nothing but a view of Christchurch city through its' large windows. To the left of the rope is a large series of 6x4 photographic prints which encompass the gallery wall. Christchurch locals of various ages and ethnicities are photographed holding a Polaroid portrait of themselves. There is a sense of ease and trust between the subjects and photographer which is not easily accomplished through brief encounters. The way the subjects in the image hold their Polaroid snapshot, their hands thrust forward clutching their photograph, they seem to be offering and accepting their representation in that moment. 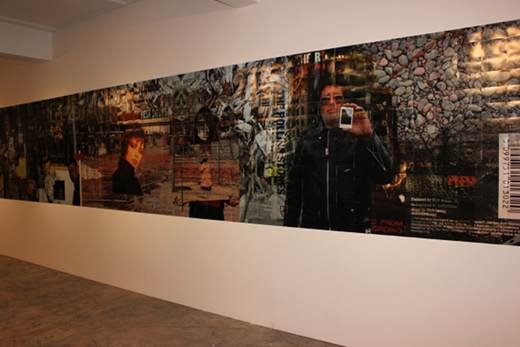 Lilo's photographic installation merges these portraits with images of Christchurch buildings and tape cassette covers featuring the likes of Eminem and Pat Benatar. Layered on top of one another, some dominate while others which sit subtly in the background waiting to be found. The complexity of the photographic layering and narratives within the installation as a whole feels like a direct conversation with the city landscape which the gallery overlooks. Woven amongst images of earthquake-affected buildings, the people photographed don’t come off as victims, but rather as evidence of the living, affirming their strength as a community.

As you travel down the photographic installation you discover an adjoining room containing a projected moving image. A young man named Juan - who Lilo had met on her journey - practices his slack rope walking skills in a park. Although Juan is not very skilled at rope walking he is better than your average Joe, continuing to practice his craft of balancing; a narrative of optimism. Even the title of the title of the show Hit Me with Your Best Shot plays a part, acting as both a playful and empowering reflection of the attitude of the Christchurch community.

Through small intimate interactions with members of the Christchurch community Janet Lilo has created a new body of documentation. Rather than use traditional photography that would not be able to compete with the local landscape and the story it tells, she has instead created a document through installation and video. Beyond the tragedy, Hit me with your best shot creates dialogue about the Christchurch community and its future.

#500 words response #2: - Lana Lopesi
Knowing an artist personally is often a curse. It is very difficult to be impartial towards artwork when you already have personal opinions formed of the artist.

Arriving at Janet Lilo's Hit me with you best shot at Christchurch's Physics Room I had similar issues, borne of my admiration for her work and practice. Lilo is a genuine community based artist who is not too cool admit that a lot of her art is her playing around.

For someone who is so heavily community-focused, the question is how to offer the same genuine experience within a new community you've been invited into. Her solution was to walk from the Physics Room to the suburb of Avondale (of the same name of her home suburb in Auckland) and collect images, footage and other things she found along the way.

Rather than seeking images of disaster, Lilo took everyday samples of what she saw and who she met. These included a box of discarded cassette tapes, new friendships and a video she made of a tightrope walker named Juan. During the opening days of the installation some of those who were photographed visited the installation. Rather than any feeling of exploitation, each visitor excited to see themselves as part of the work. A nervous Juan showed us a live tight rope walk. While discussions of relation and representation are valid in reviewing artists work, here they are perhaps unnecessary. Instead Lilo has successfully taken a sample of her experience with this community on that day, working from the simplicity of good intention.

If some might say that this collection was 'random and disconnected' I would argue that it was a visually stimulating assemblage. While it may not hit you in the face with an eyesore of a wall text, the information is there for you to find, mirroring the process of the work, which, likewise, pre-existed for Lilo to find.

Lana Lopesi and Louisa Afoa contribute to the blog #500 words - young criticality on art and culture. You can read #500 words interview with Janet Lilo about her participation in the Auckland Triennial here, and more thoughts on Janet and the Pacific Island presence in Christchurch here.