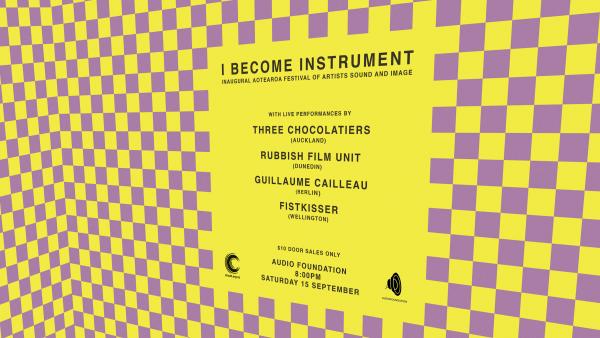 Three Chocolatiers features Auckland visual artists Isabella Dampney, Jackson Crampin, and Theo Macdonald. Says the band via email; “The 3 Chocolatiers bring melody and humour to music and a more optimistic world view that grew out of their suburban experience.” Hey, that sounds good!

Rubbish Film Unit is the Dunedin duo of Chris Schmelz and Kerian Varaine, an analogue-based film performance duo who have a long history of collaborations with experimental musicians at festivals including Dunedin’s Lines of Flight and a recent collaboration with L$D Fundraiser.

Now let’s talk about FISTKISSER. "Draped in projections of found video and animated motifs, FISTKISSER will reveal a spontaneous sonic narrative, freshly squeezed from the dreamy fruit of 80s cinematic pathos." Hey, where do we sign?!

Guillaume Cailleau is a Berlin-based French artist and filmmaker who is CIRCUIT’s international artist in residence for 2018-19. Experimenting with duration, multiple exposures, color separation and manually treated single images, his work is influenced by the American avant-garde and performative practices in Expanded Cinema. He has worked collaboratively with film and sound artists including Ben Russell, Werner Dafeldecker and Timo Kreuser.

SPECIAL ANNOUNCEMENT: Beer can be gotten in exchange for currency printed at the opening of the Guillaume Cailleau exhibition WUNDERSCHEIN, opening 5.30pm, Thurs 13 Sept at the Audio Foundation.