First exhibited in Pōkai Whenua, Pōkai Moana at the Hocken Library, Like a rock against the tide (2021) draws together two landmarks that reference Takitimu waka.

This excerpt of a meditative hour-long work first shows an ocean, framed by a pink sky. Gentle waves crash against a small rocky island, only just offshore, on top of which sits a round, red structure with a flashing light. The scene changes to a view of a different ocean, this time grey and still. A small hill sits in the middle of the frame, surrounded by rocks. People can be seen walking on the beach in front of the hill. We hear the delicate clicks and chimes of taonga pūoro played by Alistair Fraser.

The first scene shows Te Toka a Tirikawa in Tauranga Moana, where the Takitimu waka first landed, and the second shots shows Te Puka o Takitimu at Te Waewae Bay, known as the anchor of Takitimu.

As the 2020/21 Frances Hodgkins Fellow at Otago University, Reweti researched Tamatea, a principal ancestor of the Takitimu waka, who explored many parts of Aotearoa, including Tauranga Moana, and Murihiku, in the south of Te Waipounamu. In drawing these connections, Reweti sought to locate herself in Ngāi Tahu whenua, and to highlight the Māori names and narratives woven through the land. 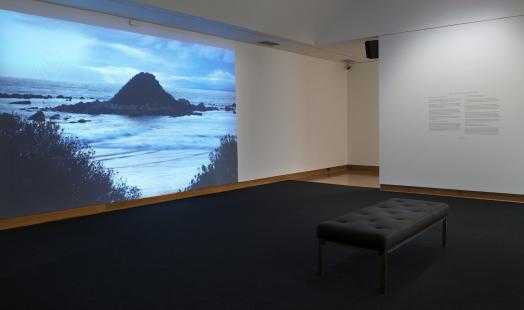 One of four videos that reference Tamaahua and his chase across country from Tuhua to the Arahura River in search for Waitaiki and Poutini.

It's a long shot
Bridget Reweti

A series of four videos set in both Tauranga Moana and Te Tai Poutini.

Can I be in your video?
END_OF_DOCUMENT_TOKEN_TO_BE_REPLACED

The Year in Art

What was 2021? Host Robbie Handcock discusses a most unusual year of art and moving image with guests Abby Cunnane, Sophie Davis, and Nigel Borell.